The year was 1990. A small college town, Gainesville, Florida, voted one of the safest cities in all of America, was about to become a three ring media circus after a serial killer was discovered to be hard at work in their sleepy little town. The ensuing manhunt and eventual take down of Danny Rolling, dubbed by the media as the Gainesville Ripper, would serve as the source notes Hollywood screenwriter Kevin Williamson would later use to write the popular Scream movie series directed by horror icon Wes Craven. But for the victims of Danny Rolling and their loved ones, not to mention those who worked the case, there was nothing entertaining about what they experienced. 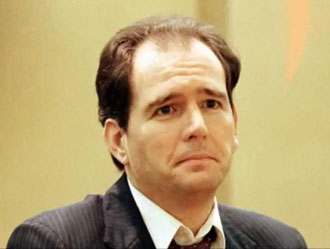 Danny Rolling was born in Shreveport, Louisiana to an abusive cop father who, by all accounts, made it clear from birth that he was an unwanted accident. His troubled youth, which came with a string of petty crimes, from robbery to peeping on cheerleaders in their dressing room, quickly escalated as Danny had trouble fitting in and holding a steady job. In May of 1990 during a heated argument Danny attempted to kill his father James. The ensuing fight resulted in James losing both an ear and an eye. Danny took off and was not to be seen or heard from again until after he resurfaced in Gainesville with an unquenchable thirst for rape, torture and murder that would push him to commit unspeakable acts with little or no fear of being captured.

The first attack occurred early on August 24, 1990. Danny broke into an apartment shared by Sonja Larson and Christina Powell and found Powell asleep on a downstairs couch. He quickly and quietly checked the rest of the house. Noting that Larson was upstairs asleep. Rolling headed back downstairs and taped Powell's mouth shut before stabbing her to death. Rolling returned back upstairs, taped Larson's mouth shut and bound her wrists together behind her back leaving her helpless and immobile. Once she was fully subdued and unable to fight back or cry out for help Danny cut off her clothing then brutally raped her. When he was done sexually assaulting her Danny killed her by stabbing Sonja over twenty times in the back. Adding insult to injury Rolling posed the bodies before leaving in lewd, sexually suggestive positions. Christina's nipples were taken as a trophy.

When police arrived to investigate the scene they were shocked by the savagery of the attack. One local reporter noted that it was the first time he had not been allowed directly in to see the crime scene and expressed concern after witnessing a seasoned officer he knew rush out of the house and vomit in the bushes. Police knew right away they were dealing with the most depraved sort of person imaginable and suspected that it wouldn't be long until he struck again. They were right. Less than 72 hours later five students had been fatally stabbed and they had discovered five blood curling crime scenes staged for dramatic effect. Gainesville had a serial killer hunting among them and by all accounts University of Florida students were his primary targets.

On August 25, 1990, a mere day after Sonja and Christina had been brutally slain, Rolling broke into the Christa Hoyt's apartment, ransacked it for valuables, and waited for her to return. When she entered her apartment around 11 a.m. Rolling attacked her from behind, trapping her in a choke hold. As with his previous victims Danny taped her mouth shut and her wrists together before dragging her into the bedroom and raping her. When he was done Danny forced her to lie face down on the floor and stabbed her in the back so he wouldn't have to see her face when she died. But Rolling hadn't desecrated her enough to satisfy his dark lust and resented that the fun was over. As a last act of disrespect and to shock those who would eventually find her corpse Danny decapitated Hoyt and posed the head facing her body.

It was clear that no one was safe from this monster.

Whatever blood lust he had awoken was only temporarily sated by his previous murderous actions. On August 27, just two days after his prior attack, Danny broke into the apartment of Manny Taboada and Tracy Paules. Tabouda, a strapping man weighing over two hundred pounds, fought back but Rolling eventually subdued and killed him. Tracy, who came down to investigate the source of the ruckus that had awoken her, ran smack dab into Danny as he was killing her roommate. She fled and locked herself in her room, but Danny broke down the door. As with his previous victims Rolling taped her mouth and wrists, cut her clothing off, then raped her before rolling her face down and stabbing her several times in the back. Danny took great care to pose her body but left her roommate Tabouda's heavier body where he'd fallen.

A deep paranoia fell over Gainesville once the public learned that it wasn't just petite brunettes being attacked but that a large man had also been slain. It was clear that no one was safe from this monster. By this point the string of bizarre murders had attracted widespread media attention with scores of news outlets setting up shop in the quiet town and hounding students for ratings grabbing sound bites. The students themselves began taking extra precautions, from switching up their daily routine to studying and sleeping together in small groups. Some bought baseball bats and Mace and had extra locks installed on their doors and windows. Gun sales also soared as helicopters with searchlights scoured the city by night in search of a killer. Not everyone was so brave. Overwhelmed by the brutality and nonstop media coverage of the crimes some parents simply withdrew their children altogether from school or transferred them, since the murder spree began early in the fall semester.