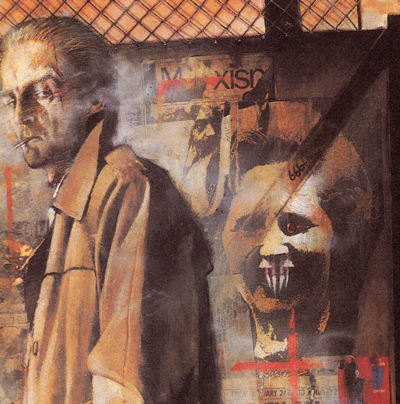 Jamie Delano hated Margaret Thatcher with a passion and his disdain for her predatory view of Britain dripped from every page of the comic he wrote. His run was was characterized by brutal satire of both the political state of the nation and its class divides. There were bankers as literal demons, aristocrats hunting the poor on horseback and a long run in which Free Masons try to collect people's fear and use it to resurrect a Lovecraftian god.

Just as Thatcher gave way to John Major, Delano gave way to Garth Ennis, who penned what many argue is the de-facto Constantine story, Dangerous Habits. Ennis also penned "Rough Trade", which was highly critical of the Tory party's seeming indifference to poverty and the then-unchecked HIV epidemic ravaging the nations' gay communities. His final arc, "Rake at the Gates of Hell" sees Constantine locked in a battle with a vengeful Satan during a race riot (based on actual riots that took place in London in the early 90's).

Ennis was followed by Paul Jenkins, who mixed Arthurian legend with anarchist subculture, who was in turn followed by Warren Ellis, hot off his work on Transmetropolitan. During this period, the left wasn't safe from Constantine's ire, either. The soft-authoritarianism of Tony Blair's nanny state was no more palatable to Warren Ellis than Thatcher or Major's. Ellis used his all too brief run on the comic to savage the crushing disappointment that was New Labour and it was glorious, if painful.

Ellis was meant to become a full-time writer for the series, but he left after DC refused to publish "Shoot," a Constantine story about high school shootings written just months before the Columbine High School massacre.

I think I've probably made my point by now: Hellblazer as a series is inherently political even when it's at its weirdest and most trippy. Strip that element away and you're left with a vaguely interesting, sarcastic wizard who calls people "mate." 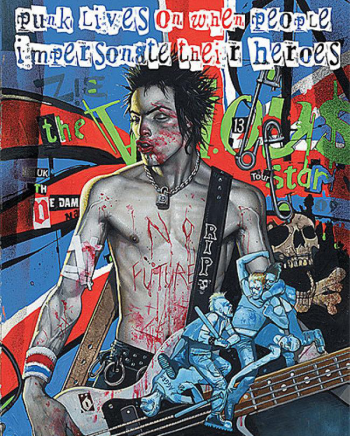 So why do it? At first I thought it was just another case of a publisher caving to the cadre of idiots on the internet who vent their spleens all over Reddit every time their malformed, Cro-Magnon senses detect something they dimly recognize as "politics" in fiction. But that's not it. Fables is political as fuck, and it ran for 150 issues to much critical and public acclaim. It's not just DC playing it safe, either. I mean, say what you like about DKIII: The Maser Race (and I will: It's shite), Miller and Azzarello (who wrote a Hellblazer story in which Constantine fucked a thinly veiled analogue of Bruce Wayne) are allowed to get deeply, brutally political, with one of the publishers biggest cash cows no less. But with Constantine? Nah, let's keep it PG, lads.

The worst part is we need that critical voice more than ever. The Tories are back and this time it's personal. We have a prime minister who has (allegedly) stuck his dick in a dead pig's head to join a secret society. Far right nationalists are gaining ground, spurred on by an ailing economy and Islamic fundamentalism both real and imagined. A cartoon dog is mayor of London. The BBC may have covered up years of systemic child abuse by television stars, and the government is prosecuting people for making jokes on the internet. This stuff is ripe for horror satire in the pages of something like Hellblazer. So I ask again.

Where's John Constantine when we need him?

Grey Carter doesn't read comics or graphic novels. He reads artisan-made sequential art narratives, because he is better than you.

Check back in next week for more articles from The Escapist's Comics & Cosplay team!