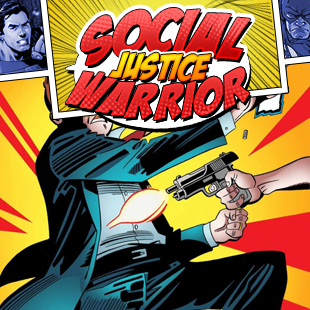 We've seen an explosion of political "gimmicks" in comics this week, and that's a good thing. Here are three reasons why.

Earlier this week it was announced that Archie Andrews would meet his death on the pages of Life With Archie taking a bullet intended for a gay friend. It's a shocking and, I think, bold way to bring the series to an end, but given how it intersects with two issues currently causing much strife - gay rights and gun control - it's understandable that many people see this as nothing more than a cheap gimmick.

And you know what? It is a gimmick. Events like this are intended to drum up interest in comics and, hopefully, lead to increased sales, which is why they happen so often, and with such fanfare. But frankly, who gives a damn? Gimmicks aren't inherently bad, after all. No artist, no matter how serious their subject matter or nuanced their approach, is immune to the need to eat. But more importantly, one can be completely sincere and still be obsessed with the paper chase. If you can make money and shine a light on the conflicts and tribulations that vex you, all the better.

But what's more, the comic book medium is uniquely suited to tackling issues of social justice and controversy in "gimmicky ways." Comics involve the adventures of colorful characters living in fantasy worlds - even Riverdale is a fantasy version of the American suburb, by the way - and as such do not need to conform to notions of literary restraint or subtlety in order to work. Further, the monthly publication schedule of most mainstream comic titles lends to them a curious, soap-opera quality, and what good is a soap opera if it can't embrace the melodramatic potential inherent in every crisis, every controversy, every social problem?

And besides, it's not like this is anything new. Comics have for more than 40 years delved into the trickiest issues we fight about, with gimmicks that are as over the top as anything we're talking about now, and even if it doesn't always work, it does explain the continued relevance of the medium as both entertainment and art. You want proof? Great, because today is as good a day as any to talk about previous instances in which comics waded into political minefields and managed - though yes, very awkwardly - to advance the discussion instead of making a mockery of the topic at hand. Read on then, and let's see just how the industry has been doing it since before most of you were even reading comics.