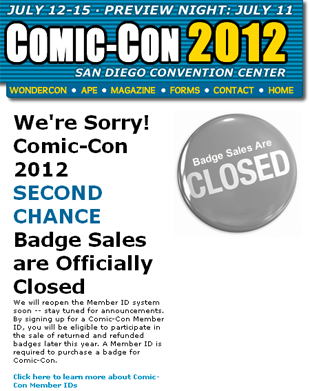 The badge purchase process has got to be fixed. Again.

In 2012, Comic-Con rolled out a new, complex system for badge purchases that, to put it mildly, failed utterly. Starting that year, all fans were required to register for a Comic-Con organization membership just like the press and professionals. Part of the justification for this was to cut back on scalping which, to be fair, was a horrible problem. Only those with a member IDs are allowed to buy badges, and the badges are linked specifically to your name. Further, getting people into the system was supposed to provide a less haphazard way of putting prospective buyers into the purchase queue. Good in theory, except instead of making things smoother, it actually destroyed the process of getting a badge for far too many people.

They way it is supposed to work is that once you've registered and are officially in their system, when the time comes to make your badge purchase you receive a link to where you can make your purchase. The problem, of course, is that thousands upon thousands of people trying to access the same servers at the same time will inevitably cause problems if that demand hasn't been accounted for when building up site infrastructure, which is, apparently, what happened. Thousands of people who should have been able to at least attempt to buy a ticket encountered error and/or site overload messages even before buying was officially opened. Many people even reported that the site would crash while they were in the process of actually finalizing their tickets. Simply put, the system simply wasn't prepared for the demand.

In 2012, badges sold out in just under one hour. Except they didn't. So many problems occurred that their system incorrectly recorded the number of purchases. Comic-Con had to roll out a secondary sale of unsold and refunded badges a few months. The same thing happened in 2013, and while this year's badge sale went slightly more smoothly, site slowness and demand still pushed people out and tickets were gone within an hour and a half. now, getting into Comic-Con is a privilege, not a right, at the discretion of the organization, but the system simply doesn't work the way it's intended. Too many fans are left bitter and disappointed by a process that feels as arbitrary as getting picked last in gym class. So what can be done? Here are a few suggestion: 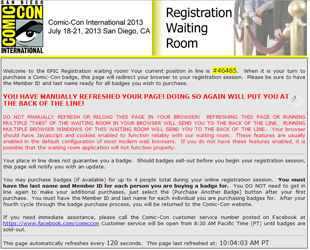 1) Use a lotto system. The convention center can legally only hold a max of 130,000 people, and as such, SDCC only issues 130,000 badges. This of course includes the number of badges held back for press and for professionals, which probably means real fans are competing for closer to 115,000 tickets. If that's the case, then why make the process even more painful and angering than it already is. Comic-Con knows how many badges it's going to sell, so it should have a lottery in which badge purchase approval is given only to a number of people equal to the number of badges currently available to purchase.

This would allow for a smoother and more orderly purchase process simply by weeding out people who procrastinate. Set a time limit for the initial round of purchases and when it's over, any leftover ticket purchase slots should be distributed in a second purchase lotto. Further, it would severely reduce demand on purchase day. If only approximately 115,000 people receive notifications that they can purchase badges, there won't be a crush of closer to a million people trying to do the same thing. Instead of one huge slog, badge purchases would happen in waves, far easier to manage and less angering than letting people think they have a chance, only to discover they're prevented by the very system designed to facilitate purchases from making them.

2) Implement a reliable hold system. Say you go to an online grocer and start putting together your shopping cart. For approximately 10 minutes, the items you select will be linked to your user name so that no one else can nab them while you're finalizing your purchase. Not so comic con, where the system works more like a frenzied Wall Street trading session, with everyone competing for the same tickets at the same time, and if you get bumped out of line through no fault of your own, you're screwed out of your ticket. Making certain that once a fan has actually reached the purchase page, they have a few minutes in which one badge is set aside. Let's arbitrarily call it 10 minutes. If you can't get the purchase made within that time, the badge then gets released back into the wild and distributed into the second round lotto. BUT, if someone is kicked off the site for technical reasons, they should have recourse to attempt to buy their badge again, even after the time period technically passes.

While a lotto system would reduce some demand, there is absolutely no excuse for Comic-Con to fail to anticipate what even 100,000 people trying to access a site at the same time will do. Spend $10,000 extra and beef up your website in anticipation of the big day.