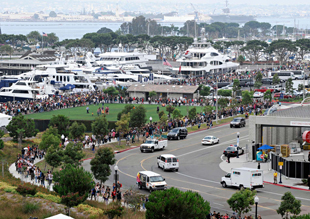 Hall H Is Definitely Breaking Comic-Con, But It Can Be Fixed.

The presentations made in Hall H, particularly those made on Saturday have become for many attendees the primary reason for going. It sounds silly of course, but when you're there, seeing footage from films you absolutely can't wait for, and months before anyone else, it's an almost electric experience.

But you all know the deal: people waiting in line overnight - a line that stretches all the way to the docks - hoping they're far enough ahead in line to make the cut, with many hundreds ultimately discovering they wasted their time. While the Hall H line is one of the most life affirming and fun gatherings of people you'll experience at a convention or anyone else - it turns into a kind of geek summer camp and everyone should check it out at least once - it's also a grueling experience. There are no bathrooms, people have to lug around any supplies with them (but cannot bring them into the Hall, so logistics of handing said items off are important), while meanwhile local vulture entrepreneurs troll the line selling vitals like water or blankets at a huge markup.

This year, Comic-Con found a way to make that experience even worse. A number of wristbands equivalent to the number of available seats were distributed to people in line starting around 9 PM the night before. These wristbands were described as guaranteeing access to the first panel in the morning, but that's not how they worked. Even after you got your wristband, you had to stay in line, or have someone with a wrist band hold your spot. No seriously - you waited in line for a wrist band, then had to wait in line in order to keep from losing the access the wristband supposedly gave you. And even with these lines, many people issued wristbands discovered that too many had been handed out. Reportedly, on Friday morning a couple of hundred people with bands were turned away despite the "guarantee".

The result: instead of making the lines more manageable, the wristbands simply encouraged people to line up even earlier. By Friday, people were starting to line up as early as 2 PM for the next morning's Hall H panels. Yes, those of us from The Escapist who attended Comic-Con had to wait in this line to get into Hall H, but I'm not complaining for myself. I was paid to be there, and while the process was frustrating, I at least had the benefit of not having gone broke to attend Comic-Con. It's the actual civilian fans who got most screwed, and who have been for years. So how do we fix it?

1) Comic-Con needs to admit that Hall H is THE reason thousands even go, and do more to accommodate them.

Now Hall H presentations are put on, and paid for, by the Studios licensing the space from SDCC for the hour or so they need it. And as such, they have final say on how the content is shown, who gets to see it, etc. But SDCC makes millions from fans coming out to San Diego specifically for Hall H. So why not work out a deal with the attending studios to allow a slightly larger number of people to at least see the presentations?

There are dozens of other rooms at the convention center with giant sized movie screens, as well as similar rooms, like the Indigo Ballroom, at nearby hotels that the convention already uses. Some of the spaces ought to be wired into Hall H's feed via CCTV during Hall H presentations known to have incredibly high demand, and opened up only to SDCC badge holders.

We all know that the footage shown during these presentations is intended strictly for the fans who bothered to come to San Diego, but that's who I'm talking about. Not people complaining because they were stuck at home, not people complaining who would never attend, but people already there. 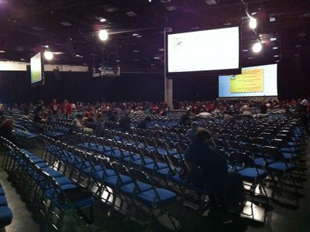 The idea of wristbands for Hall H access isn't a terrible one. But it was hilariously botched. next year, if Comic-Con sincerely wants to ease line pressure via wristbands, then getting one should work like an actual ticket would in other circumstances.

1) Wait in line to get the wristband.
2) Said wristband comes with instructions to return to line by a certain time.
3) Failure to be back on time means you forfeit your space in line and a replacement wristband is given to someone else.
4) That's it.

Even if the return time is something like 4 AM, that's better than being issued a guarantee at 9 PM that only works if you do the same exact thing you were already going to do.

3) Ban the press from Hall H. Yes, that includes me.

This one is going to get me punched, so let me stress that I only advocate for this if it's combined with my first suggestion. Hall H only seats about 6100 people, and somewhere between 500 and 1000 of those seats are always reserved for press and studio employees. Further, non-studio approved media has to wait in line too, which means even more seats taken up by media that could go to fans.

So why not work with the Studios to give the fans - who, both the Studios and Hall H insist every year are THE reason these presentations happen - a better chance at seeing the fun? Simply set aside one of the rooms elsewhere in the convention hall or one of the adjacent hotels as a press viewing area, with a CCTV feed that allows media to see everything the fans see without taking their slots. This way, the media gets to report on everything they see, thus doing their jobs, and more fans get to make it into the main hall.

Obviously, people will still want to camp out for Hall H. It's part of the core Comic-Con experience going back years. Hell, it gave us one of the best twitter accounts in recent memory. But increasingly, demand for Hall H really can interfere with the ability to see what else is happening at SDCC, and this is especially true for the fans who have limited time and financial budgets.

The fans are dedicated, and that dedication is genuinely inspiring, and intoxicating. And part of that dedication means obviously that people are willing to deal with the problems of SDCC because so much of it makes the whole thing worth it. But knowing that dedication exists shouldn't be an excuse not to take steps to make things, well, actually work. It's literally the least Comic-Con can do.