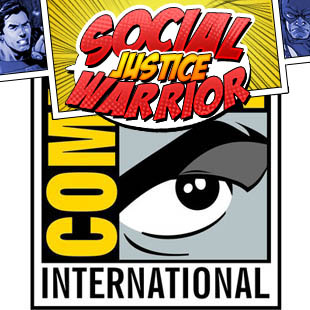 No, SDCC isn't really broken, but the giant, sprawling leviathan could use a few patches to make things easier on the hundreds of thousands of dedicated fans who show up.

With every completed San Diego Comic-Con there follows a mountain of declarations that the high point of the Geek year has been fundamentally undermined. The standard complaint is that long ago, SDCC cast off whatever superficial connection it had to the media in its name and has since become nothing more than a showcase for film and TV.

Fortunately, and I'm not the first person to say this, that isn't really true. No, it's not really hyperfocused on comics, but the fact is that when Comic-Con was founded 44 years ago, the idea of organized fandom was still a very new concept, mostly centered around Star Trek and, obviously, comics. In the 40 years since, organized fandom has exploded to include film, TV, and yes, even video games. It's all one giant community, Comic-Con is the event that brings it all together, and it's perfectly fine that it isn't just about the funny books. (And besides, it hasn't really been that since the mid 90s anyway.)

But if Comic-Con isn't a massive horrible sellout that no longer cares about the art form at the center of it, it is MASSIVE. This year's convention, like every year in the past decade plus, was sold out of 130,000 badges entirely, and that's not including the additional thousands who come out hoping to buy a discarded badge or just take part in the festivities set up adjacent to the convention. And it is beyond dispute that for the last several years, the actual experience of Comic-Con has included some maddening experiences, especially for fans.

Horrendous problems with badge purchase, made almost unthinkably awful in 2012, are only the first problem. Once you're on the scene, lines keep getting longer, navigating the slew of events keeps getting more difficult, and many people who spent perhaps thousands of their own dollars making the trip to San Diego end up spending most of their time waiting to do one or two things and missing out on so much they'd gladly check out, if only doing so didn't rob them of the chance to see what are considered core experiences.

It's no wonder every so often the convention organizers seriously consider relocating the entire convention to a city with more space to handle the capacity. But they shouldn't. San Diego has been Comic-Con's home since 1970, and frankly, Los Angeles and Las Vegas already have plenty of huge events of their own. It should stay in San Diego. But even so, some serious changes need to be made before the whole thing becomes broken and fans become so disillusioned that they stop caring about it.

I'm not going to pretend that SDCC isn't one of the greatest experiences you can have as a fan and as a geek. And trust me, it's even better when you're there as press. But there's no reason the Comic-Con organization needs to avoid making things easier - especially and specifically for the fans. I've been thinking a lot about this topic since I lost my entire Saturday to Hall H so, for what it's worth, here are two ways Comic-Con might be, well if not fixed, at least patched up significantly.