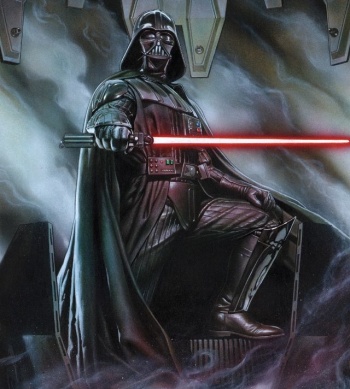 Kieron Gillen takes a direct, yet surprisingly open-ended approach to depicting Darth Vader's secret rampage across the galaxy. Some of Vader's signature personality quirks are his pregnant pauses, and his stoic, be-helmeted visage. You can never truly read him, you can only hear the words he says and the people he murders. Gillen and artist Salvador Larocca put you up close and personal during these thousand-light year stares, these quiet moments which lull you into forming your own impressions on what's going on in his mind, just as the movies did.

As he goes through his journey of whatever we're calling "Shadows of the Empire, but for Episodes IV & V," he makes many petty enemies and even some wacky new allies in his quest to find The Boy That Did The Thing, he plays any and all games of politick or life-and-death against anyone who dares to stand in his way... And the entire time I kept wondering what he might do on each crazy stop during his quest. See, Anakin might consider what the "right thing to do" in a given situation is. The man we all know he eventually comes back to, the good man who just wanted to live his Goddamned life and do the right thing. That sand-hating son of a one we know (because canon) was inside him all along. I frequently thought to myself, "Golly, gee. I know that's Space Hitler, but I also know that Space Hitler isn't such a bad guy in the final analysis and maybe since we're privy to his private life we can see him finally let down this ruthless front and do something right for a change!" 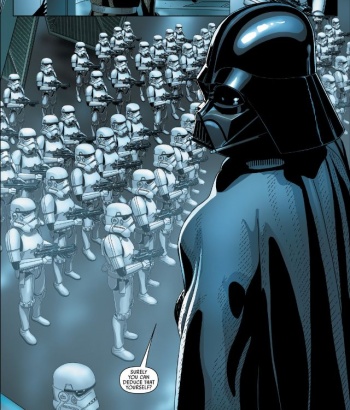 No, Phil. That's what "Ani" would do. This is Darth Vader. Darth Vader is a Sith to the core. Why negotiate when you can threaten? Why threaten when you can murder? Why murder when you can subjugate? In fact, who cares? These are all perfectly workable options for Darth Vader's day-to-day nefarious machinations.

Gillen and Larocca's masterful depiction of this immortal character - already 17 issues deep with a legitimately satisfying crossover to the main Star Wars book - consistently got me to troll myself into forgetting that while the truth is only the truth from a certain point of view, what Obi-Wan said of Vader was always correct:

And while my desires to see him do a good are continuously strangled to death like so many Imperial Officers, I don't care. This is my favorite Marvel book from 2015 and I'm thrilled it's still going. Because Darth "Literally Slaughters Tusken Raiders On The Casual For Stress Relief" Vader is still Darth Vader, the most ruthless quadruple-amputee in the galaxy, delivering you nonstop thrills as he swings his big, red lightsaber at everything and playing all sides like the chumps they are!

Fuck the Rebel Alliance, fuck Emperor Palpatine, fuck General Tagge, and fuck you. This is Darth Vader, and he's going to do whatever the Hell he wants in his own damned book.

And far be it from me to stand in his way.

Phil Kahn takes a heavily critical eye to sequential art, which is a term that people who think they're very clever use to say "Comics." You can follow follow him on Twitter where he also talks about anime a bunch.

Check back tomorrow as we introduce our final comics column: Gutter Mouth by Grey Carter!