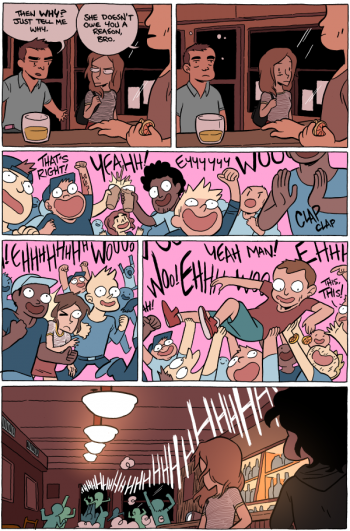 Meredith Gran is another alumni of the Webcomics Era That Was and while Skirting Danger was exactly as good as it is impossible to track down anymore, she's moved on from that project to Octopus Pie, a comic that seamlessly blends the surreal and real while having the best jokes about Millennials that you can get.

And that's something worth touching on. I'm a Millennial myself (somehow, despite being fucking 30), and our generation gets no shortage of beef from the media et al. And while grampa sits on his kitchen counter pounding out a screed about how "Millennials don't like to eat cereal because it involves washing bowls and that's what's wrong with America" or whatever, Meredith aims a critical lens at Millennials with a familiarity and sincerity that can only come from someone who is either a part of that generation, or living amongst the population on a Jane Goodall level.

The story, now almost 900(!) pages long, follows the lives of a bunch of New York 20-somethings that we all know. Their struggles of living a life of excitement and romance within the confines of the modern gig/weed/organic food economies are depicted honestly and earnestly while peppered with great cartoony bits that I can only describe as "Millennial Magical Realism." Like Scott Pilgrim, but without the pandering.

And the art is just great, too. Meredith is a master of cartooning, and it shows in her cast's body language, faces, her use of motion... come to Octopus Pie for the great story, stay for the masterclass in Webcomic Artistry.