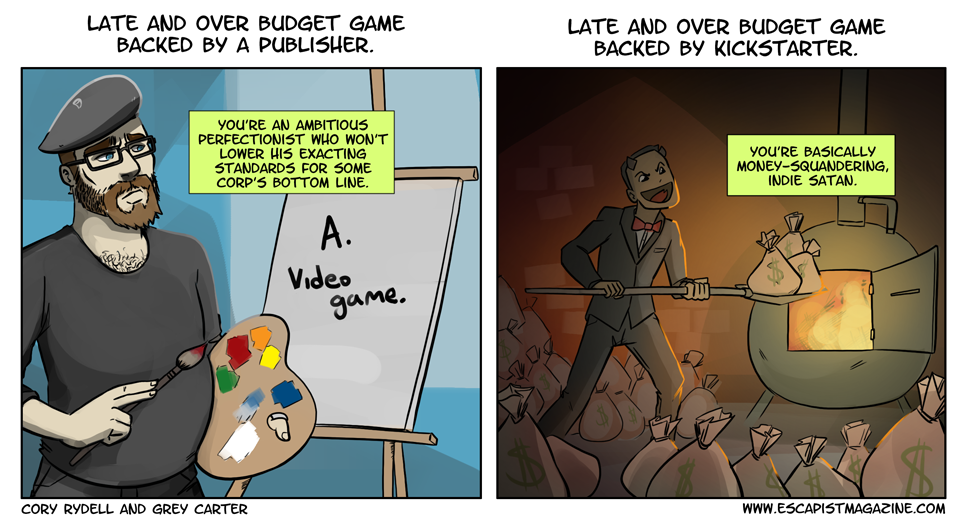 So one of the interesting things about Kickstarter is how it's changed the way people look at "auteur" devs, protracted development processes and budgets. When it's Activision, Ubisoft or EA footing the bill, people are quick to break out that old Miyamoto chestnut: "A delayed game is eventually good, but a rushed game is forever bad." In fact, most of those publishers face criticism for releasing games too quickly. Ubisoft, with its penchant for releasing a beta version of an Assassin's Creedgame every year, gets that one a lot. It's funny to see that attitude evaporate into thin air when Kickstarter backers are involved. Suddenly, being able to hit deadlines and make games without literally hurling gold bars into the ocean matters a great deal. What gets me is that most of the "notorious" Kickstarter devs, your Schafers and your Molyneuxs and so on, are really just doing what they've always done. A Double Fine game cost a lot and was in development for ages? Well fuck my shit, that's never happened before. It just turns out you can get away with spending a ton and taking forever when the guy complaining about it is Bobby Kotick.

I generally don't give to Kickstarters that aren't simply final production costs for finished projects. Not because I dislike the system - I actually think its responsible for the niche-genre revival of the last couple of years - or because of TEH BIAS, but because I don't like to be invested, emotionally or financially in a story/game/product so long before its final release. I avoid early access games for similar reasons. I don't want to see your weird, greasy skeleton of a game, I want to see it when it's done.