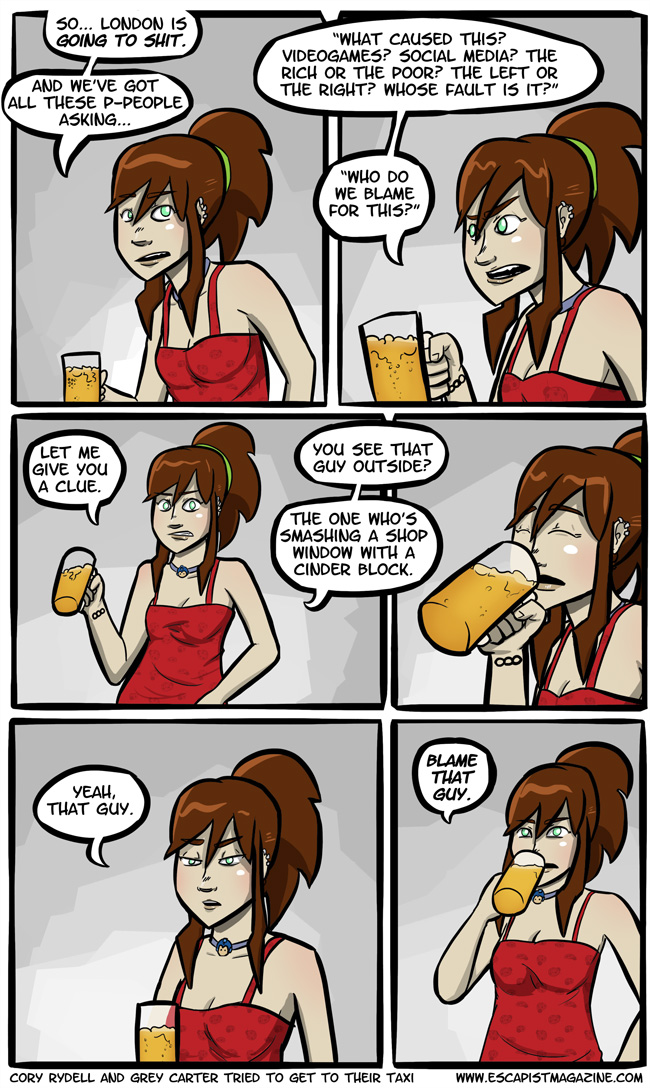 Or the cretins who murdered three men with their car. Or the guys stealing valuables from a student who's just had his jaw broken. Or the people who beat a 68-year-old retired accountant to death. Or all of the above.

I'm not oblivious to the fact that the recent riots in the UK are just the most obvious symptom of a more systemic problem. Being the left-leaning, hippie-type I am, I've chosen to interpret the riots, at least in their infancy, as an angry response to poverty and a succession of governments that have stripped the poor of nearly all access to further education. More right-leaning people see the riots as proof that the law simply isn't tough enough on criminals. Both arguments, though grossly simplified, have their merits, but at this point they're entirely academic. A person destroying and looting other people's property under some kind of banner is just as much of a shit as someone who's doing it simply because they can. In my opinion, people from all over the political spectrum have been handing out the blame to everyone but those who truly deserve it, the rioters themselves.

The saddest part is, the true cost of these riots isn't just measured in properties damaged, money lost, goods stolen, livelihoods ruined or even human lives lost. It will also be measured in the freedoms we lose as the government seeks to reclaim control of the streets. There are people out there who want to take our rights away, not because they're cartoonish Orwellian villains - though I imagine some are - but because they genuinely believe that trading people's rights and freedoms for stability and safety is a logical decision. I absolutely disagree, but it's hard to hear arguments against stricter governmental control over the sound of a mob of fuckheads setting people's houses on fire.