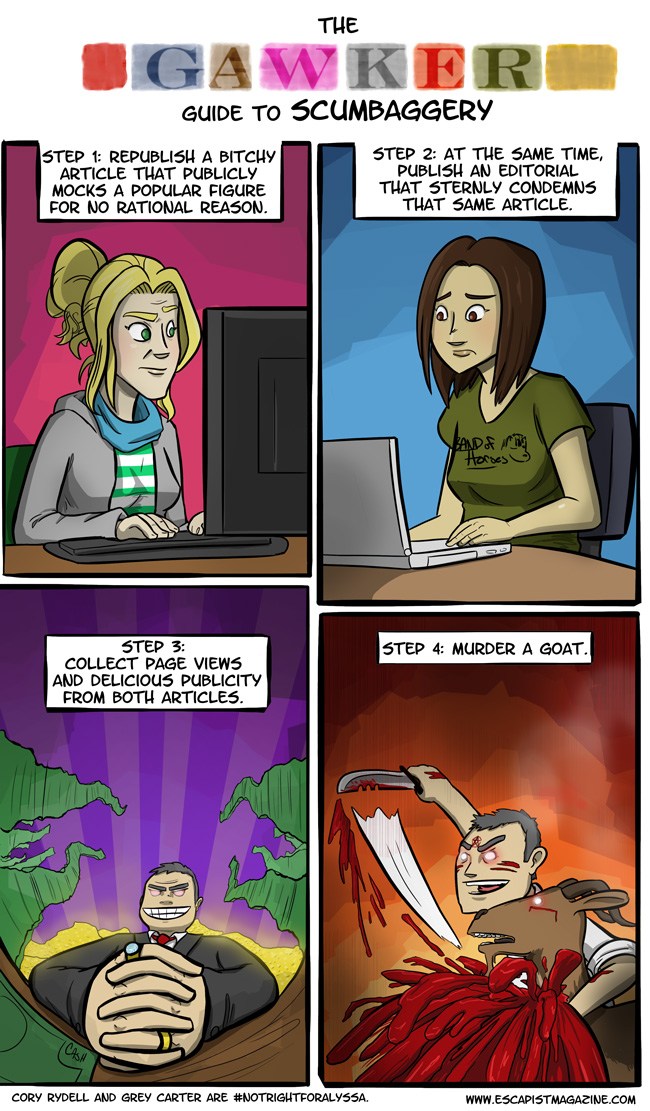 By this point you're probably sick to death of hearing about mewling Cylon infiltrator Alyssa Bereznak and her now notorious article about her dates with Magic: The Gathering folk hero, Jon Finkel. While it's easy to judge Bereznak - mainly because her article presents her as a lopsided homunculus who only vaguely resembles a human being - and many have, considerably less ire seems to be being directed at Gawker Media, the blogging/news network that published the bloody thing in the first place.

The article should never have made it past Gizmodo's editorial staff. It was unfunny, grating insufferably smug - Bereznak's instruction to "Google her" made me grind a good inch off my teeth - and just downright unethical. For whatever reason, perhaps because of Gawker's dedication to "Stir-Fry Journalism" - which is far less delicious than it sounds - or perhaps because, as other outlets have claimed, Gawker is ran by a bunch of very talented trolls, the piece went live. Gawker, of course pulled it immediately, because they didn't want to look like a bunch of heartless bastards, mercilessly mocking a talented young man for no rational reason whatsoever.

No. Wait, they didn't. What they did, was republish it. That's the journalistic equivalent of shitting into your own hand and carrying it around, waving it under people's noses and cackling with simian glee as they recoil in confused disgust. The traffic generated by Bereznak's article probably outweighs any ethical concerns it presents. In fact, as I pointed out in today's strip, Gizmodo.au - which I should mention is a licensed operator and not part of Gawker's central management - went as far as to republish the article complete with a link to their own fiery condemnation of it. That's like waving your shit in someone's face and then using your free hand to point out the little bits of corn in it, all the while commenting on how disgusting and vile it all is.

All that being said, the story does have a happy ending. Jon Finkel is more popular than ever, and is no doubt knee-deep in succulent vaginas by now, Gawker got a few bajillion hits, I got some strip material and something to moan about in an overlong, angry rant no one will ever read, Cory got to draw a man stabbing a goat in the throat, and the internet got a new hate figure to sharpen its claws on. Yay.