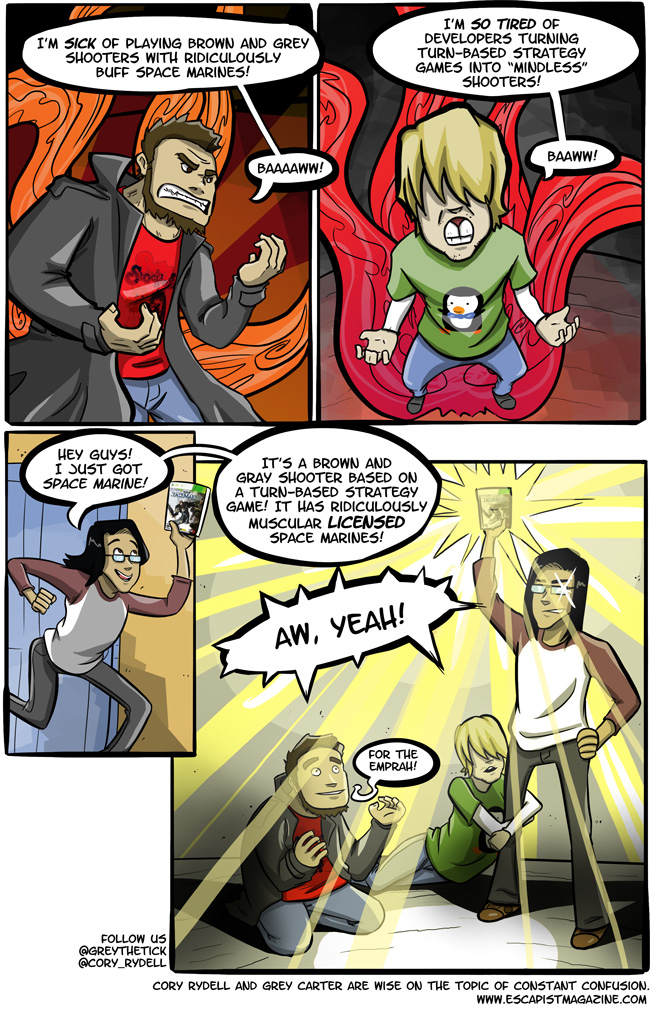 Don't fret, noble servants of the Imperium, today's strip isn't really aimed at Relic's Ork-stabbing Ultrasmurf romp. This bit is though. Despite having made my way through about half of Space Marine's campaign, I've yet to develop an opinion of it. Mostly because it's astoundingly - perhaps even supernaturally - average in almost every way. People seem keen to compare it to Gears of War because, when you break them down, they're thematically identical, but in my opinion it plays more like a clunky Ratchet and Clank, without the gun that turns people into sheep. I vaguely recall enjoying my time playing as the titular space marine, especially the bits where I'm given access to a jet pack, but I also came away from each session feeling drained. It's like it was siphoning away my personality, leaving only an empty bitter husk. Does Metacritic account for psychic vampirism? It probably should.

Today's strip is actually about games criticism. Particularly, how it's being broken down to its most base components so people can complain about anything they please. There's a growing hatred amongst pithy internet critics for muted or monochromatic color schemes, Quick Time Events, regenerating health, cover systems and slew of other randomly selection design decisions, that doesn't take into account how well they actually work in a given title.

As an example, there are numerous people out there who played Duke Nukem Forever and came to the conclusion that the game's biggest issue was the fact Duke had regenerating health and he was limited to two weapons at once. Yeah, limiting Duke's arsenal was a dumb idea, and it didn't mesh with the game's overall design, but let's be honest, that decision is little more than a footnote in the encyclopedia of things DNF got wrong. Regardless, being easy to understand and simple to parrot, it's the complaint that gets wheeled out the most on forums. Similar complaints arise about even well received games such as the latest Deus Ex title. It's great for people like me, who thrive on unjust mockery of people's hard work; it's less fun for anyone who wants to discuss a game without some arse breaking out his arbitrary list of gaming commandments like he's Moses fresh from the mountaintop. It's reached a point now, where in a bid to market to these people, publishers are advertising their games on the basis of the gameplay features they don't have.

There is a legitimate argument that these design decisions are overused, but the idea that there's no place for them, or that they're the horsemen of the gaming apocalypse, here to crush the industry under the clichéd hooves of their corridor-shooter war-stallions, is ridiculous. It's just rose-tinted "Things-were-better-in-my-day-get-the-hell-off-my-lawn" fogeyism masquerading as populist criticism, and it's really quite irritating. The fact this rhetoric is gleefully tossed aside when the right license comes along does little to placate my righteous fury.

Now that I've finished the traditional angry bleating and waving of the arms, on to more pleasant news: Cory and I have been chatting with the eldritch apparitions in charge of the Escapist about some Critical Miss-themed merch - shirts, books, fridge magnets, land mines, et al. Give me a shout if there's any particular characters or lines you'd like to see adoring your chests and/or walls.