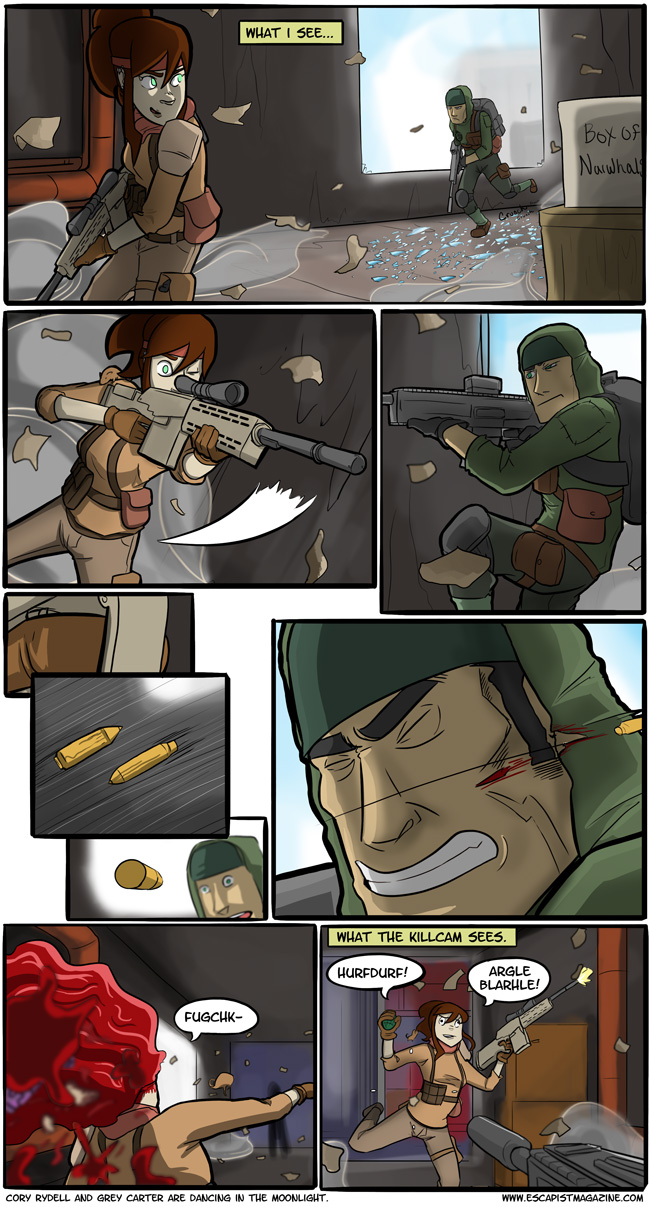 Today's strip is about how we see ourselves. It's a treatise on man's idealised image of himself, and how that image clashes with the harsh truth of objective reality.

It's also about the fact that Modern Wafare 3's killcam seems to be making things up as it goes along. What I see as a tense, close-cut gun battle in which my opponent narrowly grasps victory, the game often chooses to interpret a kind of effortless execution. In the game's eyes; I stagger around, unaware of my surroundings, drool pooling on my silenced assault rifle. Occasionally I fire my gun. Into the ground. I'm fairly certain I'm not actually that terrible. Perhaps it's a product of the infamous lag everyone's been talking about - a leftover product of Black Ops deviant netcode, apparently - there's been some noise about that. It brings the whole game into question. Are those videos of players dominating the competition - what's the current word for that by the way? 'Beasting' or 'grizzling' or some such nonsense? We gamers do speak a lot of wank, don't we? - products of genuine skill, or were they just that day's lucky winner on the wheel of latency? Are there dozens of other players out there, watching themselves being humiliated on Youtube and thinking, "Wait a second. It didn't happen like that?" Lag has always been an unavoidable bugbear when it comes to gaming over the internet, but I don't recall people shooting around corners in Quake 3.

Regardless, I think I'll stick to the latest Elder Scrolls effort for now. Of course, Skyrim can be an unforgiving place too, but at least when a giant crushes my skull out of fear that I'm about to molest his mammoths, I can be fairly certain that it's actually my fault for not getting out of the way.