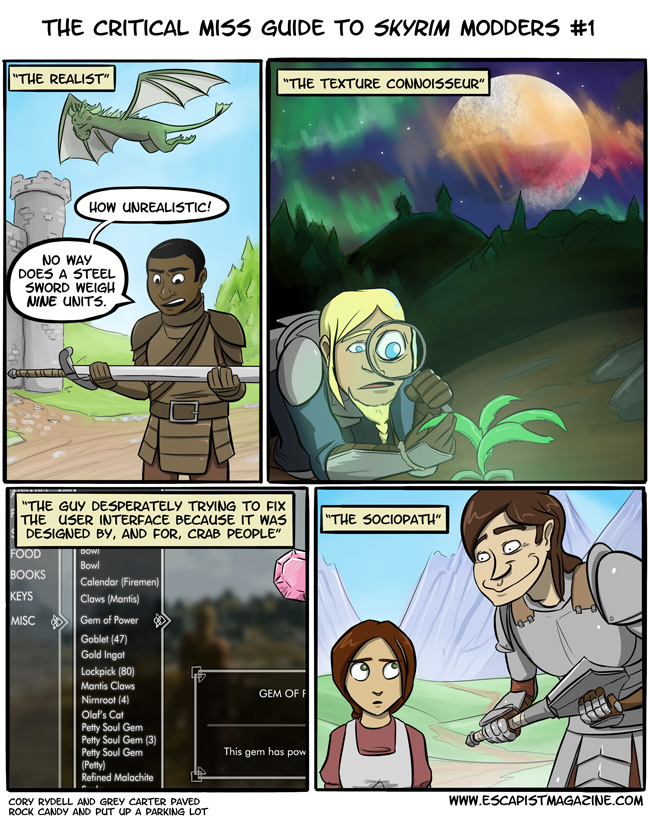 It's rare these days, that I get to proudly beat the PC gaming drum. Generally, hardcore (oh what a ridiculous term) gaming on the pc is a massive pain in the arse, and if it wasn't for a smattering of worthwhile exclusives - most of which are coming from the indie end of the spectrum these days - and the fact I'm very picky about certain really important acronyms like FPS or FOV, I would have given up on it years ago.

So I admit, I'm just a tiny bit smug when I say the PC version of Skyrim is quite clearly the superior version of the title. I'll spare you the usual platitudes about better graphics and the superiority of the mouse and keyboard - one of those is highly subjective, the other a matter of opinion. It's the mods, that tip the balance.

In this strip and the next, we'll be exploring the various genera of modder, based largely on my experience in the Oblivion modding community. We may exaggerate somewhat.

Note: It occurs to me now that panel 2 seems like its knocking the guys who produce texture mods for Skyrim by making them seem like nitpickers. That wasn't the intent; those guys do wonderful work and Skyrim does have some really nasty texture work. That being said, I think people who call the game ugly because of some low-res textures can't see the forest for the low-res trees, so to speak.