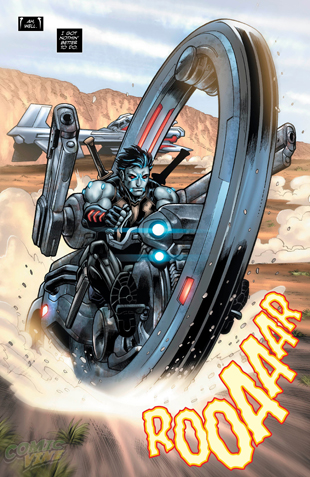 The problem is that Lobo isn't really interesting enough to carry the story. His new backstory isn't that engaging, and his personality traits don't stand out from other superhero badasses. This Lobo was once the bodyguard and lover of a Czarnian princess, until he had to wipe out the planet's population for an undisclosed reason. Now he uses that reputation to gain headway as an intergalactic bounty hunter.

While he occasionally plays at humor using (bad) witticisms, Lobo still carries guilt from his actions. He even goes so far as to mutilate himself, burning out the part of his brain that allows him to have nightmares, until, that is, his Czarnian physiology makes it grow back. (Lobo, by the way, doesn't exaggerate any of this for humorous effect. It's all presented in a straightforward fashion within the first ten pages.)

Even if DC had gone the extra mile to make Lobo an original character, he'd be a disappointment. We've seen his personality type dozens of times: The ruthless anti-hero with a mysterious past who takes out his aggression on countless enemies. DC Comics already has characters like this. Fiction itself is filled with characters like this. The first issue offers nothing that helps Lobo stand out from the crowd; I mean, the entire reason he kills "Faux-Bo" is because apparently only Lobo has the right to live with his guilt. Give me a break.

What's especially frustrating is that Lobo is a missed opportunity for a new kind of parody. The original Lobo lampooned a hyper-violent character cliche that became the defining trait of 90s comics. The New 52 Lobo could have done this for modern comics, mocking super-serious heroes and their tragic backstories. The New 52 is dying for a series that could take the piss out of itself like that, offering self-aware humor instead of dour character reboots. Unfortunately, DC is playing this one straight, hoping he'll become a hit like Batman or Wolverine.

Still, the series has some potential. There's an impressive array of alien designs, and lots of room for spectacular sci-fi action battles going forward. It's entirely possible Lobo will become more engaging going forward, even if just on a base level. But as it stands, Issue #1 doesn't have much to grab your attention and keep you asking what will happen next. To be honest, I would have much rather seen more of the fight between each version of Lobo, a battle so intense that Lobo passed out after delivering the killing blow. But instead we only catch the fight at its end, long after all the interesting bits happened.

To be honest, that's kinda how Lobo feels altogether now.

Bottom Line: Lobo's first issue is a giant missed opportunity, featuring an average sci-fi plot that would have been improved with an exaggerated Czarnian. Instead we got New 52 Lobo, a generic anti-hero who doesn't quite understand he's supposed to be a parody. Its premise and action sequences offer some hope for improvement going forward, which I hope DC takes advantage of.

Recommendation: If you aren't familiar with dark superheroes from the past thirty years, you may enjoy Lobo. But for better or worse, the Main Man you grew up with isn't here anymore.