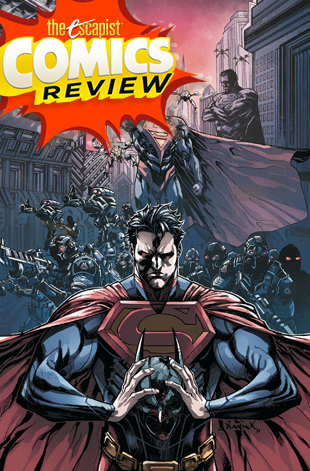 The video game spinoff defies expectations by being pretty damned good, both as a tie-in and as a What If?.../Elseworlds style story.

When a company publishes a comic book based on a video game, it's not supposed to be some grand affair; just a few issues to promote the game before it disappears into the ether. It's incredibly rare is for such books to have a life of its own after players forget about the original game, but that's exactly what Injustice: Gods Among Us has done. Long after NetherRealm Studios stopped producing DLC, DC Comics is still publishing Injustice, currently sitting on 25+ issues, annual specials, and three graphic novel collections, the latest being Injustice: Gods Among Us - Year Two.

Thankfully, Injustice isn't just some publishing fluke; it's one of the better dark superhero comics DC is putting out right now. Starting from the common trope of an evil, parallel universe Justice League, Injustice guides readers through Superman's descent from the very beginning, while each hero slowly sacrifices their moral principles. What's amazing is that Injustice is wholly dedicated to drawing most of DC's continuity into its premise, which has allowed the series expand into Year Two and provide a bigger cosmic scope than the game ever did.

Injustice: Year Two opens with Superman having seemingly secured his reign over Earth. He's broken Batman's back, driven other heroes into hiding, and straight-up murdered Green Arrow and Martian Manhunter. But now the Justice League has bigger problems to worry about. The Guardians of Oa are deeply concerned about Superman's actions, and have sent Ganthet to investigate. This action sparks a new conflict between the Justice League and the entire Green Lantern Corps, prompting Sinestro himself to step in and take sides.

Perhaps the number one reason Injustice succeeds is that it's a comic book story first, and a video game adaptation second. Its creators are fully committed to exploring Superman's impact on every element of the DC universe, from street-level vigilantes, to cosmic superheroes, to characters from magical realms. The story has become just as big as any crisis event, and does an great job balancing developments in a dramatically engaging way. The only difference is that no reboot or editorial recon is going to save Injustice's characters; everyone has to deal with the permanent consequences and fallout of everyone else's actions.