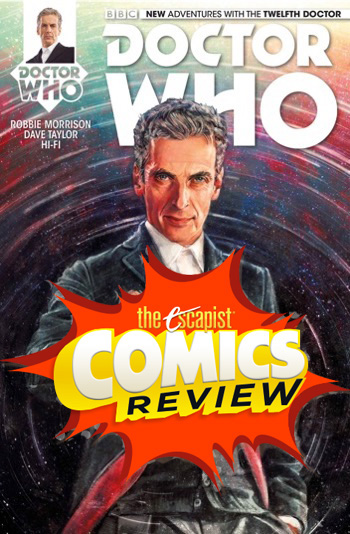 For those fans for whom 50 years of televised episodes aren't enough, Doctor Who has had ongoing comics for nearly as long. And while I dig the TV show, sometimes comics seems like the better medium for the series. Where televised episodes are constrained by budgets and the skill of a myriad of special effects artists, in comics Doctor Who is only limited by the imagination of the writer and artist -- which allows the series to go places that TV just can't take it. There's no bubble-wrap monsters for our heroes to pretend to be menaced by and every non-TARDIS location isn't recognizably that same building in Cardiff.

Plus, comics means we keep getting stories -- canonical stories, no less -- about the Eleventh, Tenth, and, soon, even the Ninth Doctors, all of whom have left the role of The Doctor behind them. And this month the Twelfth Doctor has finally made his comics debut for Titan Comics. Though we're nearly to the end of the first season of Peter Capaldi's run as The Doctor, we can be reassured that there will be comic adventures to sustain us while the show is off the air.

The first comic story arc, "Terrorformer," is off to a good start, even though it's only setting up the building blocks for the story to come. If Doctor Who comics have a failing, it's in the pacing as the comics series typically follows a standard "24 pages with a cliffhanger ending" format. Sometimes this works, and sometimes those cliffhangers feel forced and abrupt, interrupting the flow of the story. Regardless, it's a different story flow than TV viewers are used to with the show's tendency to wrap up a storyline in a single hour-long episode -- though it's very reminiscent of the classic series in which episodes were split into half-hour chunks (each with a requisite cliffhanger ending) that would be broadcast over the course of several weeks.

The Story So Far
"Terrorformer" joins The Doctor and Clara during season 8 of the show, some time after "The Caretaker" but probably before The Doctor and Clara have their falling out in "Kill the Moon". The duo are headed to an ice planet so Clara can learn to ski (The Doctor warns her of ice-sharks before sending her off), but of course the trip has gone somewhat awry and they've landed on a tropical paradise instead.

The ice planet has been terraformed. Get it? It's been terror-formed! Yeah, Doctor Who does love its clever titles.

The Look of Comic Doctor Who
The exotic locale gives the series a chance to do what the comic allows it to do best: We get to see sweeping vistas of an alien landscape (ranging from tropical jungle to lava pit to alien skyscraper), several different alien species, and a couple of different spaceships. It might not seem noteworthy, but presenting all of this in full, which is easy in a comic, would be really expensive for television... which allows the comics to have a particularly grand scale.

The art and coloring is well-suited to telling this kind of story. Each panel is dense with action, from backgrounds teeming with alien plant life to ships shooting across the sky to images of characters actually doing things, little in this comic is still. Even panels with less activity use dramatic angles to suggest action (or the possibility of it), and the art style does a lot to drive the comic along. The colors are crisp and bright in a way that seems somewhat unearthly, adding to the feeling that we're not exactly in Kansas.

As to the character art... The Doctor looks a bit disconcertingly like John Kerry, but the rest of the art is enjoyable enough that I'm trying to ignore that.