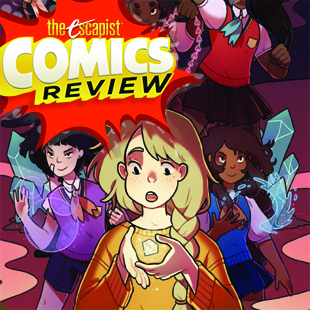 Friendship, magic, dragons, and lots of different girls make the first issue of Crystal Cadets a success, even if it's not doing anything terribly new yet.

Magical girl stories aren't new. We've had decades of them, but many of them have been Japanese, such as Sailor Moon, Magic Knight Rayearth, and Cardcaptor Sakura. The genre hasn't quite caught on in American comics. With a definite magical girl influence comes the comic Crystal Cadets by Anne Toole and Katie O'Neill.

The first issue of eight doesn't start off with a narrative that deviates from most magical girl stories; the girls who will make up the team meet each other, and the protagonist discovers there may be something special about herself. With a uniform for the Crystal Cadets in different colors for each cadet, it feels a lot like Sailor Moon's Sailor Guardians.

Zoe is a shy, young girl who just moved to a new school. The first pages of Crystal Cadets #1 throw us in the midst of a battle between a girl fighting a dragon to rescue another girl. While she's not wearing anything fantastical, she wields some sort of magic and rides a winged creature. It turns out this is a story Zoe's sketching out, just to be interrupted by a trio of unwelcoming girls.

Middle school is a time where girls are encouraged to attack each other, and we see that in these three girls who can't even bother to remember Zoe's name. Of the three, we only learn one of their names. Serena comes up in the issue again later, and she occupies the Queen Bee role. I rarely like this trope, and with nothing else to judge her character, so far she's a one-dimensional character who just happens to be bratty.

There's not too much meat to the story yet, but the first issue does a good job of introducing Zoe and three girls who come to her rescue. This trio, with the clearly made up excuse of being exchange students from Oklahoma, make note of her sketchbook but come to the conclusion she doesn't have powers.

It turns out Zoe does have a special power that's been passed down from her birth family. Her adoptive family either has no idea or chooses not to say anything, but it's probably the former. Zoe finds a gem included in a present from her birth mother, and then things start to kick off.

Characters are incredibly diverse in Crystal Cadets, which is great to see in a comic championing the strength of women. Characters, especially within the cadets, are of different ethnicities. Characters also have different face and body shapes, something else we don't always see in comics. Jasmine has a much longer face while Zoe's face is a bit wider. Olivia's limbs and torso are a bit wider than others'. This is all subtle, but it's great to see women of different backgrounds and sizes in a comic where they're all heroes.

Overall, colors are varied and eye-catching. There are several panels in which a color is used in the background rather than the actual background of the sky or Zoe's house. The pinks and yellows are gorgeous next to the blues of the sky. Faces have a simplistic, kids' cartoons feel to them that helps with the expressiveness of the characters; Zoe's panic, Selena's shock, and some creepy faces near the end of the comic are great examples of emotion. 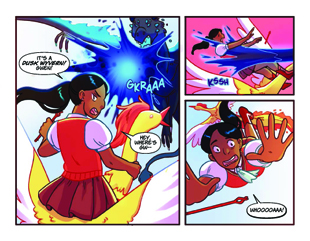 Girl-heavy comics are important, and we often find them in independent works. A report found only 30 percent of Marvel's characters are female, and DC is only doing marginally better. While some would claim there are fewer female characters because few women read comics, that's far from the truth. With comics often being gendered as a male space with all the strong male superheroes and the damsels in distress or even the hypersexualized female characters, a lot of girls - myself included - feel intimidated and unwelcome. Crystal Cadets is a great comic to give to girls to introduce them to comics and graphic novels. It's also great for giving boys more positive examples of how women aren't all the same.

With the setup underway, I'm looking forward to reading the second issue of Crystal Cadets. The first issue's narrative isn't that different from your standard fare of magical girls, and there was nothing in this issue that really stood out to me other than the girls themselves, but this could be a great series if it does something new with the genre. Even if it sticks to conventions, it has enough going for it that it looks good.

Bottom Line: Crystal Cadets #1 doesn't have a lot to show yet, but it looks like the rest of the series will be about friendship and teamwork among girls in a charming tale about defeating evil. There's a great premise, and my biggest caveat is that not a lot happened in the issue due to it being a setup for the next issue, which I am eager to read.

Recommendation: This is a great comic for girls who love things like Sailor Moon and want to see more girls kicking butt and helping each other out. Don't let that stop adults and men from picking it up either!