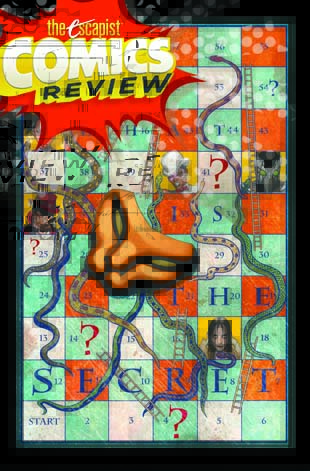 The New 52's Secret Six will leave you yearning for the original team to make a comeback.

You know, I'm not the guy who complains about how reboots are worse than the souce material. But the New 52 Secret Six was always a hard pll to swallow. Gail Simone's original series was special and deceptively subversive, taking a team of DC Comics supervillains and turning them into a hyper-violent family. It was packed with charmingly sociopathic characters and explored topics like sexuality in a mature way that was rare for mainstream comics.

Now DC Comics is resurrecting the series, and has put Gail Simone at the helm, which should be good news. The problem is this first issue really lacks the charm that make the previous Secret Six so much fun. Even the return of classic characters like Catman and Black Alice is only engaging because Secret Six fans know who they are.

As with any first issue, it's possible Secret Six will need to be judged on its first storyline instead. But right now, Secret Six #1 isn't giving me a reason to care about the New 52 versions of these characters, and considering everything the classic series achieved, that's incredibly disappointing.

Our first issue opens as Catman is captured by mysterious individuals posing as state troopers. After an impressive fight scene leaving behind some significant collateral damage, Catman wakes up in a sealed room with five other individuals, most of whom appear to be deranged criminals of some sort. Moments later, a sign appears on the wall asking "What is the secret?", while an announcement threatens that without an answer, one of their number will die.

The problem is, that threat means very little considering how little we know about what's going on. It doesn't help that we're provided so little information about the rebooted New 52 team. Take Catman himself; in the last series, he was a third-rate supervillain who reinvented himself in Africa, had a passion for nature, and struggled to reconcile his villainy with a desire to be a superhero. In other words, he was a rich and compelling character. The New 52 version, on the other hand, is incredibly violent, goes into a rage when in captivity, and threatens to pee on the faces of enemies to mark his territory. Seriously.

The rest of the team doesn't fare much better. There's Porcelain, a bank robber who can change the density of objects to make them turn brittle. The Ventriloquist is the New 52's answer to Ragdoll, thanks to an obsession with her own sickliness. Strix's only contribution is to hand Catman a post-it reading "I kil peepel". It's a funny moment, but ultimately implies her skillset isn't so different from anybody else in the room.