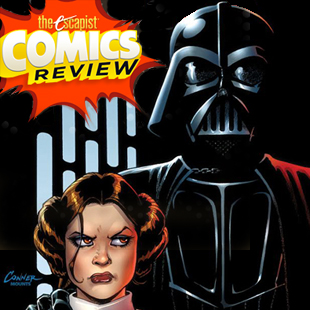 Lightsabers? Sniper Wookies? Hives of scum and villany? Check, check, and check. Marvel's return to the Star Wars universe is strong with Force.

Last year, comic readers learned that Marvel would be reclaiming the Star Wars franchise after more than twenty years of stewardship by the fine folks at Dark Horse. It wasn't really all that surprising. With Disney taking possession of Lucasfilm and already owning Marvel, it was only a matter of time before the house of mouse pulled the famous franchise back into the clutches of its in-house revenue-generating monstrosity. Even so, it was a considerable disappointment, especially taking into account the de-canonization of the Star Wars expanded universe, of which the various Dark Horse titles were an integral part.

If the first issue of Marvel's new Star Wars is any indicator however, what we're gaining could very well be worth what we're losing. In the space of 30-something pages, writer Jason Aaron and artist John Cassaday have delivered easily one of the best Star Wars stories in recent memory. It takes the characters we love, recreates them just you remember and pushes them forward into a new continuity that's fresh, exciting and, above all else, genuine feeling.

Star Wars #1 opens with a static take on the franchise's classic text scroll. Set shortly after the events of A New Hope, the issue begins with the Rebel alliance flying high after the destruction of the Death Star. Hoping to capitalize on that victory, they send the invincible trio of Luke Skywalker, Han Solo and Princess Leia to raid an Imperial weapons factory.

Posing as emissaries of Jabba the Hutt, the trio sneak into installation to enact a risky plan that, if successful, will leave the factory in ruins and the Empire's war machine crippled even further. Things, of course, don't go to plan and our heroes are left to try and pull things off completely against the odds, as usual.

All about the characters it is.

While this set-up provides some obvious foundations for exciting action sequences, it also gives Jason Aaron some great opportunities to demonstrate just how good he is at replicating the speech and mannerisms of the classic characters and their actors from the original Star Wars trilogy. Han's lines are imbued with a sarcastic cock-sureness that's impressively close to the way Harrison Ford spoke in Episode IV. The opening section where he essentially smarms his way past Imperial security is practically worth buying the comic all on its own. 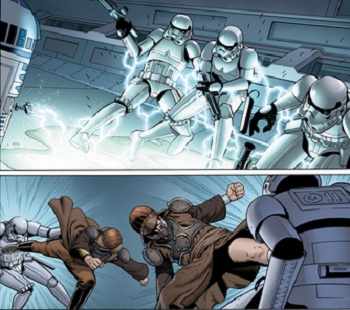 Leia and Luke likewise, come across as authentic extensions of who they were at the end of A New Hope. Luke is no longer a naïve farmboy, but he's still rash and clearly governed by his emotional responses to situations. At one point, for instance, despite the fact that their mission is high risk and reliant on stealth, he frees a cage full of slaves who then have no choice but to trudge along after the trio as they work their way through the Imperial factory. While his actions are noble, they demonstrate his inability to be someone who can't bring himself to sacrifice for the greater good.

Leia, in turn, is still very much the woman in charge. Even though Han is the one leading the mission she has no problem overriding him and taking command, sometimes even to the detriment of the group. As the comic progresses, Darth Vader shows up (big shock I know). Han, smartly, tells Chewbacca (lying in wait in a sniper's roost) to ignore the Sith Lord lest they alert the entire factory and all of its Imperial inhabitants to their presence. Leia, however, insists that a chance to take out Vader would be worth failing the mission and orders Chewie to "take the shot." Chewie does, Vader survives and all hell breaks loose. Good call Leia.