Check out the best cosplayers of PAX East 2011!

Ah, the time-honored tradition of every convention where there is a critical mass of geeks and nerds - the fantastic cosplay. I'm not positive what the motivation is for these folks who dedicate such time and ingenuity to crafting a likeness of their favorite character in videogames, movies, TV shows or comics. Is it the necessary attention to detail? Is it the attention that wearing these costumes gets them on the convention floor? Perhaps these uber-fans just want to feel like it's Halloween all year long.

Whatever the reason, PAX East 2011 might not have had huge numbers of cosplayers like SD Comic Con or even Gen Con did this past year, but it more than made for it in quality. Some of what I saw must have taken weeks if not months of planning and execution.

Here are the best costumes I saw on Friday and Saturday while walking around the show floor at PAX: 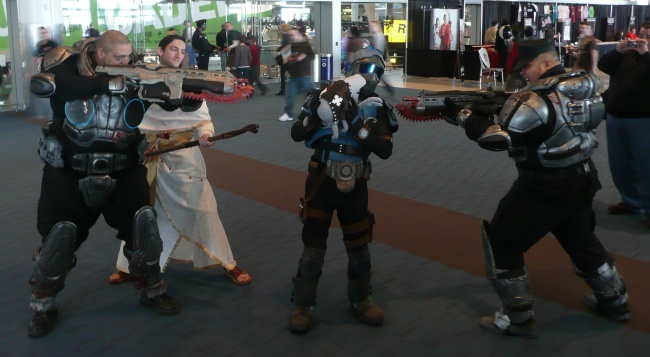 The Gears of War gang led by Marcus Fenix certainly wants to shoot that hapless guy being attacked by a ticker, but what's the priest doing there?