Of course the Internet isn't having any of Zach Snyder's mopey Batman. And all is right.

Days like this make me love the Internet so hard. Yesterday, Zach Snyder dropped the first image of Ben Affleck as Batman. I liked the new costume a lot, but everyone on earth agrees Batman really needs a serious pep talk. So #sadbatman lept to the rescue. If you'd like to lose the rest of your day, there are new contributions to the meme popping up constantly here.

Memes can get a little too cute for my taste - everyone leaping over themselves to force a shared moment to happen causes a lot of bad jokes. But #sadbatman is a perfect example of getting it right. Man of Steel wasn't as bad as people often complain, but it was a morose, overserious snore at times, and the unrelenting "darkness" of the photo released yesterday approaches a level of pretension usually seen only in high school poetry clubs, and suggests we're in for the same and more come next summer. The piss needs to be taken out of it with a vengeance. Mission accomplished.

Yeah, this probably isn't the reception Zach Snyder was hoping for, but so far Man of Steel 2: The Battening practically screams "fist fight in the rain". And on the bright side, #hailhydra has now been eclipsed, so it's probably a win. So read on then, and see some of our favorite Sad Batmans.

First up, Batman is sad because his first cup of coffee no longer does the trick. Found via @laughingsotic. 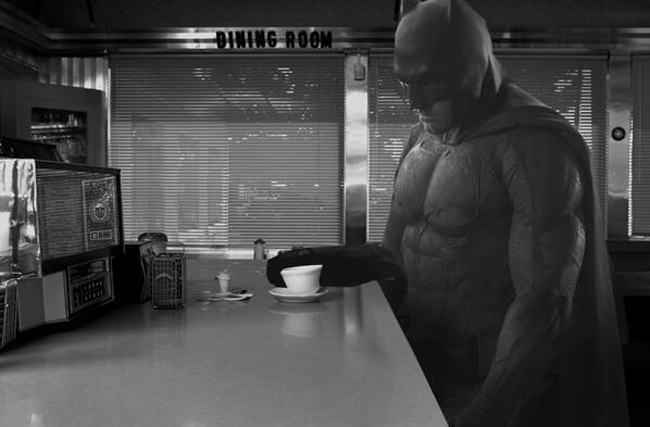