Daft Punk Star Trek and a ton of Smite are only a tiny fraction of the impressive cosplay on display at the annual Dragoncon parade.

I can't really describe just how exhausted I still am after 4 days in Atlanta for Dragoncon 2014, but it's somewhere in between 'jogging 10 miles' and 'boxing'.

Take the sheer amount of activity and people as 60,0000 fans and an unknown number of onlookers converged on a cluster of hotels in downtown Atlanta, and throw in fours days of racing from panels to parties to concerts to photoshoots. Add to that Atlanta's summer heat and sweltering humidity. It's enough to make someone (like myself) who has been softened up by years on the west coast reach for the smelling salts and run for the coldest, wettest swimming pool one can find. But I was only wearing jeans and probably ought to shut the hell up. Dragoncon is all about the cosplayers, and they braved the extreme weather and crush of humanity like it wasn't even happening.

Related: Be sure and check out our previous coverage of Dragoncon 2014 here.

Need proof? Simply attend the annual Dragoncon parade, a march through downtown Atlanta where cosplayers show off their creations just as the sun is burning off what remains of the previous night's cooling-off and and starting the hard work of melting everyone caught outside into a puddle. It's staggering to see people in latex and makup, or wearing bulky, heavy recreations of everything from Middle Earth to Smite, smiling and waving at the local citizenry without passing out from heatstroke.

We were on the scene for the big event and have brought back evidence that cosplayers ought to be studied by scientists trying to unlock the secrets of human endurance. I might be in need of a week long nap, but after looking back through these photos, I'm pretty sure I'm just a wimp. And now you can be too!

We have a ton of photos from the parade, and for the first gallery we'll start with a look at the staging area before the parade began in earnest. The Escapist's own Newton Grant managed to get behind the lines for an up close and personal look. Enjoy. 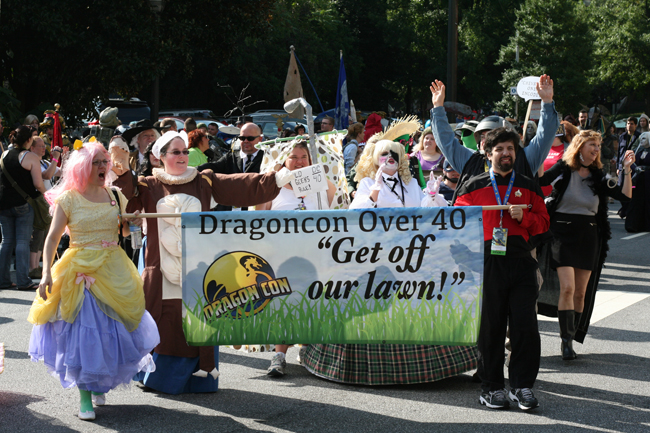