The hottest day of the convention provided the hottest cosplay.

Dragoncon 2014 wasn't as big as San Diego Comic Con - this year's estimated 60,000+ number of attendees is technically dwarfed by SDCC's more than 130,000. But you wouldn't know it from the scene, where it seemed that every single inch of downtown Atlanta was crammed full of brilliant costumes and great people and, once the sun went down, drunk people.

The apex of this crush of humanity happened on Saturday during the annual Dragoncon parade, when thousands gathered to watch as attendees marched through downtown and showed off not only their skill - seriously, these costumes! - but also their dedication (I think I may have mentioned how hot it was, right?).

Related: Be sure and check out our previous coverage of Dragoncon 2014 here.

We got so many great photos out of the parade, in fact, that we had to split our coverage in two. If you missed it, check out part one of our Dragoncon Parade gallery, then come back here for the thrilling climax. Borderlands? Check. Mass Effect, complete with an appearance by Mark "I should go" Meer? Double check. Incredibly mind blowing Samus costume? Triple check. All that and more await you. Click on, and stand in awe.

First up, here's a look at just one section of the crowd who turned out to see the fun.

All photos by Ross Lincoln and Newton Grant 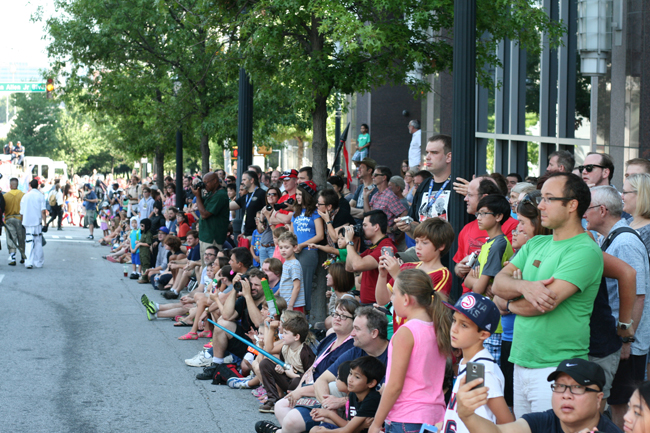