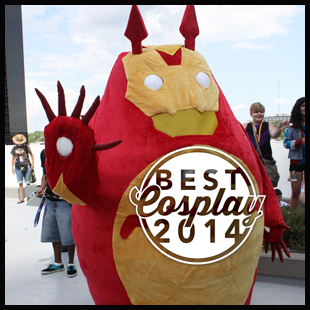 In part three, we look back on some of the craziest and best from Dragon Con and Blizzcon. Warning: Adorable Iron Man Totoro.

With 2014 rapidly coming to a close, you might have noticed that The Escapist is taking a look back on 2014 and awarding the best of the year in all categories we cover (see our best of the year nominees here.) Well, almost all. If you're particularly astute, you've also noticed that while we here on the Comics and Cosplay channel have nominated comics for end of the year awards, we didn't actually nominate any cosplayers.

That's because 2014 has been an absolute goldmine of incredible cosplay, and there was almost too much to pick from. Whether it was great video game cosplay at the various PAX conventions, the insanely competitive outfits on display at San Diego Comic-Con, the nuclear explosion of artistry that is Dragoncon, or any other the other conventions and events we covered, we were, time and time again, completely blown away. As a result, we couldn't narrow our selections down to just 1 "best of". But lucky for you, our indecision is your gain, because we're celebrating the year in cosplay by showcasing our 100 favorite costumes from throughout the year.

Related: see The Year In Cosplay part one and part two.

Continuing through the end of the year, stay tuned for galleries curated by members of the Comics and Cosplay team. Today, read on, and see part three of the series, selected by Ross Lincoln...