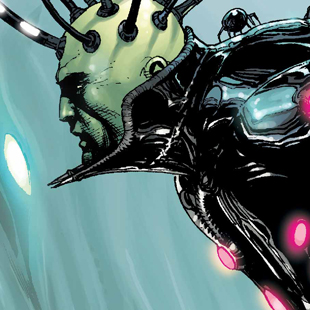 Wow, really? That's disappointing. But what does it have to do with Convergence?

Convergence is significant because it's for those long-time readers: It proposes that parts of the pre-New 52 timeline still exist, tucked away outside of the established multiverse. And for two months, it's going to replace the New 52 and show what these characters have been doing all this time.

And it's all thanks to the evil supervillain, Brainiac.

Brainiac has a pretty complex history of his own, but all you need to know is this: He's famous for shrinking and stealing pieces of alien worlds (usually a city) before they are destroyed. While the citizens of each city are prisoners, Brainiac considers himself a preserver of knowledge, keeping the shards of each world safe for all time.

Convergence expands Brainiac's modus operandi to a universal scale. Outside of grabbing pieces of alien worlds, Brainiac has also been grabbing slivers of entire dimensions. Anytime he detects that a parallel dimension is about to wipe itself from existence, he encases a portion in a dome and locks it away where no one can find. And considering DC Comics wipes out a parallel universe every year or two, he's gathered quite an impressive collection.

Among his many domed universes? A piece of the classic, pre-New 52 timeline, just moments before Flashpoint changed it permanently. Within their domes, Superman and Lois are still married, and about to have a baby. The original Titans team still exists, as does characters like Donna Troy, who never appeared in the new universe. Barbara Gordon still helps superheroes from her wheelchair as Oracle. Renee Montoya is still investigating crimes as The Question. The list goes on. 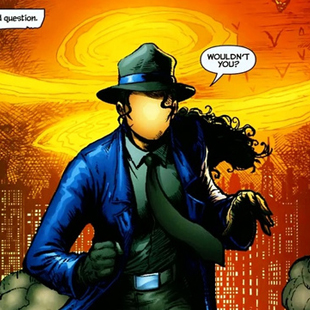 Even better? That's not the only "dead" universe Brainiac grabbed a hold off. The promotional material portrays several fan-favorite Elseworlds, including Kingdom Come, Red Son, DC One Million, the Tangent universe, and many more. Even the Flashpoint timeline that started this whole mess is kicking around, as is the Future's End OMAC-infested timeline that Batman Beyond fought against.

So for two months in 2015, DC Comics will completely drop the New 52 to tell canonical stories of these universes interacting with each other. If nothing else, it's a huge olive branch to the readers who have been pining away for the versions they grew up with. It broadly acknowledges that these incarnations haven't been forgotten, and may still have a role to play in DC's multiverse.

Of course, there are more cynical ways to look at this. Most of the New 52 has been critically panned ever since it launched, with several of its titles facing cancellation after half a year. Meanwhile, some of the best books DC publishes are either set in a parallel universe (The Multiversity, Injustice: Gods Among Us, and Earth 2) or focus on specific characters who don't interact with the New 52 (Aquaman and Wonder Woman). Outside of an initial sales boost, DC may not be able to justify this grand experiment for much longer, and may need to consider listening to what the fans have said for years.

In that context, Convergence isn't just a crossover event: It's a test to see if readers will put their money where their mouths are and buy books about the classic characters. After all, some comic book fans will rail and complain for just about anything; if DC is going to even consider scrapping the New 52 for good, it needs to make sure the pre-New 52 is financially viable.

But there's yet another, even more cynical perspective: DC Comics is just copying Marvel Comics.