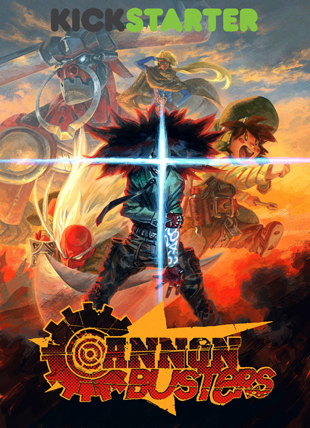 What's been the process of bringing Cannon Busters off the page and into motion on the screen?

It all started at JM Animation. I'd met colleague Kim Kidoo, a talented animator/animation director. I planned a pilot myself, with me directing and him as my animation director. I had Fabian Schlaga on board as art director, and clean-up/compositing/in-between was divided between MOI animation Studio in Seoul and Parks Movie, a smaller animation house in Seoul. But I ran out of time, and before I knew it, I was tapped as Creative Producer/Supervising Director on Black Dynamite: The Animated Series. So I inevitably moved back to America to help the project along at Titmouse. The decision to launch a Kickstarter for Cannon Busters came earlier this year as my production time on Black Dynamite Season Two crossed its halfway point of production, and I began facing what my next move was content-wise.

What can you tell about the team you've pulled together for the Cannon Busters pilot? It seems like you've got talent from all over the globe.

Joe Madureira (Battle Chasers, Darksiders) was among several artists I've looked to for inspiration, motivation and idolized in my early days. He did a lot for mainstream comic books in America at a time when anime/manga was still largely a mystery. His works on Uncanny X-Men and Battle Chasers showed it was okay to be influenced by Eastern artists in comics and animation. At least to me, he did. Over the years he began to recognize my work and we eventually connected and became good colleagues. He was always an open supporter of my works. When I finally showed him the stuff I'd been producing/directing in Korea for the Cannon Busters project, he responded with full support. That was what motivated me to inquire about his involvement in the project. When he agreed, I was elated.

Thomas Romain was someone I learned of years ago, from his work on the Sav! The World/HAL Filmmaker co-production, Oban Star Racers. I encountered him on this inspirational "Making of Oban Star Racers" documentary on the DVD. It was basically a behind-the-scenes look at these French talents which were a mix of independent artists and Gobelins graduates moving to Japan to live and work in this Japanese animation studio to make Oban. It was fascinating and encouraging at the same time. I was inspired to say the least. I would even go as far as to say it played a small role in my decision to move to Korea. Thomas has since moved on to be one of the most recognizable anime creators in Japan, co-creating Code Lyoko, as well as teaming up with Macross legend Shoji Kawamori to create Basquash!, and recently serving as a mecha designer on Space Dandy. He's currently a staffer at Satelight, Inc. Japan, one of the most popular anime studios in Tokyo.

Fast-forward six years later, and Thomas reaches out to me randomly on Twitter, saying he saw "Failing Your Way to Success", my TedxTalk lecture in Sinchon, Seoul about facing fear head on. Thomas mentioned that he and I were similar in our choices to move and work in animation abroad. Once an opportunity to go to Tokyo came up this past July, I saw reason to visit Thomas and Satelight studios and pitched my idea. The rest is history.

Right around that time, I'd met another talent from France, Yann Le Gall, a BG artist on Basquash! as well. Amazingly talented, and who also contributed great development work to the project. 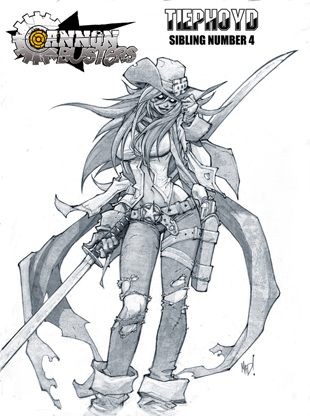 Tim Yoon was someone I'd met during my time on Nickelodeon's The Legend of Korra as a storyboard/production artist. I was still living in Seoul during this time and had come home for a visit. I met Tim during a visit to Nickelodeon and we talked a lot about the process abroad, the difference in production as well as politics. After we both moved on, we reconnected and when I asked if he'd be interested in joining this project, he agreed. I'm blessed to have his support. He's a brilliant guy and knows a lot about making really good things on time, ha, ha.

Animator Bahi JD was a younger talent I'd known via DeviantArt. He was someone who I'd exchange discussion about my art or his art back when he was doing experimental GIF animations. He's grown to be a strong up-and-coming key animator, having lent his work to Ghost in the Shell: Arise, Space Dandy, Ping Pong, and Kids on the Slope among others. We had planned to originally work together on another project of mine, before I decided to launch the CB Kickstarter. But once this project got going, I asked if he'd work with me on this instead. He agreed and we'd been working together since.

All of these relationships kind of formed organically in their own way and it's quite exciting to have such an international team from different walks of life, experience and regions come together to create something unique.

You've worked in animation in the States and overseas. How do those experiences differ?

There are the obvious differences, like the language difference, the cultural history, the homogenous nature and etiquette. Those have a surprising effect on how it affects you as an artist on a day to day.

From a more subtle standpoint, creativity, at least to me, isn't a switch you can just cut on and off. I believe emotional context and confidence affects how good you do a thing. When you're outside the box in such a culturally shocking environment like South Korea, being able to just do well isn't always an option, you have to find a comfort to do well. That took me a while.

Also, there isn't much pre-production and post-production in Korea's animation production community, as that's an American domain, at least as far as the shows created in America are concerned. You're only doing main production (layout, key animation. in-between, clean up and ink/paint), whereas in America it's largely just pre-production and post-production (scripts, records, design to editing, ADR, SFX and final delivery). So in America, it's largely like experiencing only A and C, but not B. And in Korea, it's like only experiencing only B, and not having access to be involved with A and C. It's very compartmentalized.