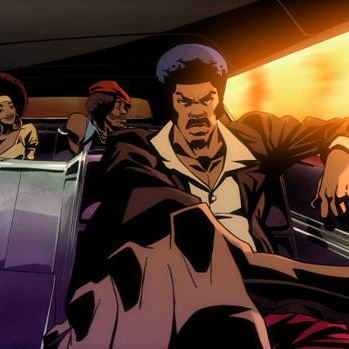 Since we're talking about the differences you've experienced working in the East and the West ... After a recent online interview, you mentioned there was a lot of debate in the comments over whether or not Cannon Busters should be called "anime". So how would you categorize Cannon Busters? And what about other projects you've worked on, like The Legend of Korra, The Boondocks, and Black Dynamite ... projects that were developed primarily for American audiences?

I would categorize Cannon Busters as a very cool, adventure/dramedy with action. Visually, there are clear, stylistic influences that are apparently visual motifs one would consistently find in animated shows from Japan if they looked hard enough, but there's plenty of Eastern inflections in there as well as it being an Eastern story and concept. As for Legend of Korra, The Boondocks, and Black Dynamite, I would say they are also animated shows that showcase a strong visual style seen in most Eastern animated projects, but there's a lot of strong Western sensibilities, not only in the design, but the concept, story and writing of those shows you've mentioned as well.

So what do you think defines "anime" and what qualifies as such? Is it a particular style or technique? A more abstract genre? Or is it even something that needs to be specifically defined?

I think there is no one, definition of what "anime" is. I personally think it depends on who you talk to. Some believe it has to be made all by the hands of a Japanese person who was raised by anime gods and ritualized to be a contributor to all things anime. His/her hands would have to be touched by the ghost of Osamu Tezuka himself in order to be labeled as legitimate anime.

Seriously, though, what's really in a label? I've heard this "anime/not anime" argument mostly from those who usually have the least interest or influence on the genre or work in the field. Dai Sato, one of the most respected creators/writers in Japanese animation, who has contributed to hits like Cowboy Bebop, Ghost In The Shell: S.A.C., Eureka Seven, and Samurai Champloo, had a fascinating interview several years ago for Japan Society where he was asked his opinion on The Boondocks, and if Sato-san considered The Boondocks as "anime". He answered, "Yes, I think it does count as anime. The foreign otaku might not see it that way. But I would take the stance of looking at it from a technical standpoint, and whether it belongs to this historical line of animation, or that. And it is limited animation, like Japanese anime."

I think "anime" simply means "animation" in Japanese. It's even derived from the French phrase for animation: "dessin animé". The style itself which was largely ushered in by the "Godfather of Anime", Osamu Tezuka (Astro Boy), who was largely influence by Mickey Mouse and Betty Boop's designs from America at the time of Astro Boy's inception. Historically, the animation medium in general has always been a shared medium, influencing many across the globe for decades, and the folks who are more passionate and less informed of the history of the stylistic approach to the medium known as anime they so vehemently protect will see that someday, too.

The tricky part is who you say it to. In my experience the "it is/isn't anime" rule book is also a guard tactic amongst consumers and fanatics who create a sort of mutually-agreed upon term or box or label to protect their fandom. But I assure you, the people I've worked with who create anime don't see it that way, we don't have those discussions. They're just making stuff together, style differences notwithstanding. What we're doing with Cannon Busters, should we be fortunate enough to be funded successfully, is what I like to call a term coined by Thomas Romain as "World Animation."

If you've noticed, not one usage of the word "anime" is in our campaign presentation. It's something others have projected onto the project. We're not interested in the labels. We as professionals with like-minded interests just see an opportunity to take all of our experiences in the field and create something awesome together for the first time. I think anyone who has a true love for the medium of animation can appreciate that.