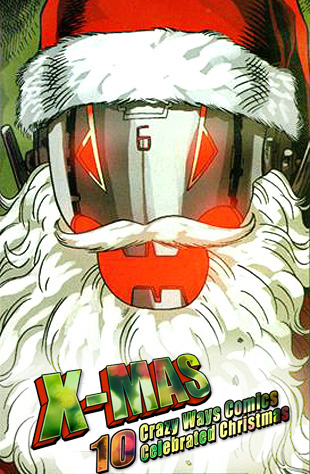 The Escapist wishes you a ho-ho-holy crap Christmas with a look at the insane ways Comics have celebrated the holiday.

This article is a collaboration between David Chapman and Ross Lincoln.

What best encapsulates the Christmas spirit? Is it friends and family coming together? Is it the exchange of gifts? Or is it kicking hellacious ass?

We vote the latter, and not just because Lethal Weapon and Die Hard are the greatest Christmas movies of all time. But as great as movies centered around destruction and mayhem during the Yuletide season can be, nothing tops the absolutely crazy stuff that goes down on the pages of comics.

Yes, Christmas in comics is usually an excuse to get everyone's favorite characters together for one big superpowered holiday feast. There are usually laughs and good times, right up until some evil force decides to crash the party. You know ... just like what happens in real life.

Comics also end up being a great place to deconstruct the holiday without having to worry about budget constraints or the inability to turn back pages to figure out just what the hell is happening. Which is why you're just as likely to see The Kingpin try and ruin Spider-Man's christmas as you are to see, well, something that abandons narrative altogether and just turns into a long and weird gag about how comics are actually made.

Anyway, in the best tradition of comic book superhero team-ups, David Chapman and Ross Lincoln have joined forces to compile some of the wackiest and most awesome Christmas happenings from the long history of American comics. You want Ambush Bug? Looks like you were good this year! How about Ultron as Santa? Wish granted, true believer! All that and more awaits you. Read on, and have a merry Christmas!