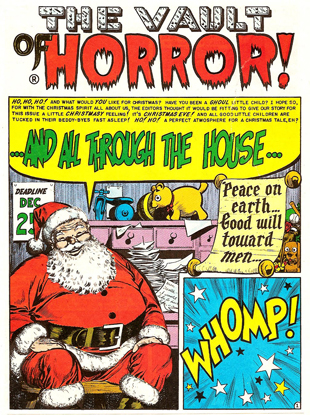 What better way to celebrate Christmas, than with murder, guilt, panic, and a richly deserved karmic end at the hands of a serial killer? This classic Vault of Horror story from December, 1953, concerns a cruel woman who, on Christmas Eve, has just murdered her milquetoast husband for his insurance. Unfortunately, her young daughter woke up during the caper, and now the murderess must distract the kid with Christmas cheer while she figures out how to dispose of the body.

Meanwhile, local news brings reports that a homicidal maniac has escaped from an insane asylum and has been cutting a murderous swath through the local community. Thus the cops are now conducting a massive manhunt. The murderess can't leave to dispose of the body, nor can she call the cops when, predictably, the escaped madman appears outside her house. Eventually, her murder-chickens come home to roost thanks to her daughter's embrace of the Christmas spirt: the madman is dressed like Santa, and young daughter mistakes him for the real thing. She lets him in the house and well, fade to black with the implication that it's going to be a very bloody Christmas.

And nope, you didn't misread this - "And All Through The House" was published in 1953, before the hilarious controversy caused by the odious book "Seduction of the Innocent" and the comic industry's hasty adoption of the Comic Code Authority self-censorship regime. Pre-code, comics were able to be grisly and exploitative in a way they wouldn't be again until the 1990s.