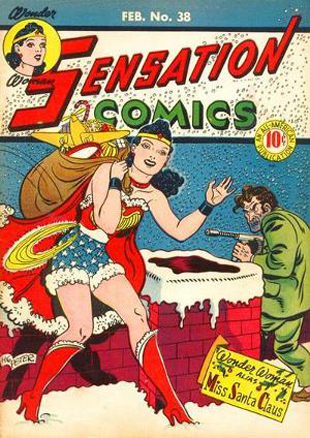 A story that combines practically everything that made the golden age of comics so golden, Sensation Comics #38 is less a Christmas story and more something like Lethal Weapon or Die Hard, like when Christmas is just the backdrop to some serious asskicking. Plus, Wonder Woman is the star.

On Christmas, Wonder Woman decides play Santa Claus for the children of a poor neighborhood after meeting a little boy who has completely lost the Christmas spirit, thanks to his wise discovery that Santa only seems to visit the children of kids whose parents have money. While delivering presents, she learns that some nefarious criminals are planning to rob the US Treasury (this is before the idea of a super villain had really matured).

The would-be robbers take a bunch of the poor children hostage, the dicks, but they fail to take Wonder Woman into account, and she delivers a swift ass kicking to them. Just like Riggs and Murtaugh! The comic isn't quite as replete with the kind of fetish-heavy overtones that Marston tended to throw into his Wonder Woman stories, but considering it involves Christmas, robbery, and ass kicking, I'm guessing some of his boxes were checked.

Long story short, this is a charming artifact from olden times, and it boasts some pretty great art too. Plus punches. Christmas punches!