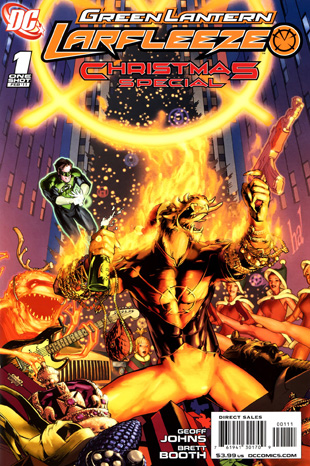 They say Christmas is a time for giving, but let's be honest ... there's a lot to be said for the getting part of it as well. Don't believe me? Just take a cue from Larfleeze, DC's resident Orange Lantern and the avatar of avarice.

When Larfleeze wakes on Christmas morning to discover he's been overlooked by Santa Claus, he sets out on a personal quest to find the "Holiday Guardian" and get his Christmas list filled from start to finish. After learning that Santa's usual digs are at the North Pole, Larfleeze takes a trip to the top of the world to flush the big guy out of hiding. When Hal Jordan shows up to stop the rampage, he takes it upon himself to try and teach Larfleeze a little more about the true meaning of Christmas.