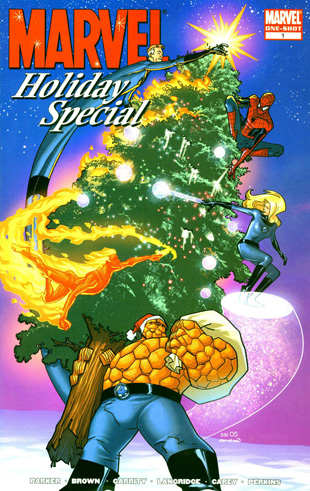 What makes Marvel Holiday Special 2005 stand out is the story "Yes Virginia, There is a Santron". The story begins with the Avengers all coming together to celebrate the season. Meanwhile, across town, a young woman named Virgie is putting the finishing touches on a robot Santa Claus. After firing up the robot, it immediately sets off to spread good cheer to all. Well, to all except the Avengers, who Santa-bot has decided must die. It doesn't take long for the Avengers to figure out that "Santa" is a repurposed Ultron. Yes, that Ultron, the same Ultron we'll see on the big screen in next year's Avengers: Age of Ultron. Naturally, the Avengers ultimately beat Ultron (with a cookie, no less) and teach Virgie to believe in Christmas once again. Personally, I'm hoping this story inspires Joss Whedon to include a post-credit scene in Avengers 2 with a bearded Ultron calmly stating "Ho-ho ho" in James Spader's voice.