From the desk of Stew Shearer

The past few years are the first ones where I've really committed myself to the hobby of reading comics. 2014, in turn, probably saw me reading more comics than the rest of my life combined. They're like potato chips these books. Once the hook you you'll be doomed to keep buying and collecting them until your basement office is nothing but a long series of interconnected comic book stacks.

I can't gripe too much though. The only reason I read so many comics is because the year produced so man good ones. Space opera, superheroes, Hollywood sleaze and high fantasy; 2014 was a year in which good examples of all these were easily found. In fact, looking back on the year, it's hard for me to pick just five favorites. But here we are and it's time to give it a go. 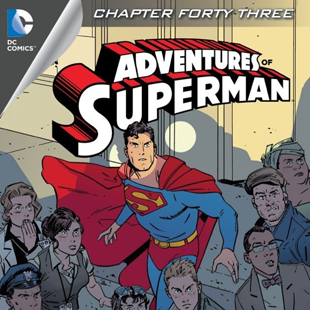 #5: The Adventures of Superman

The Adventures of Superman is one of those books that kind of sneaks up on you. You don't think about it most of the time and it's often overshadowed by a lot of the other books in DC's library. Then the new issue turns up in your subscription box, you read it and when the back cover closes you're left amazed by how good it is.

It's hard for me to really pinpoint what's so great about it. In fact, when you get down to it a lot of the stories the series tells are pretty typical fare for books about the Man of Steel. Something happens and Supes shows up to punch things until the status quo is restored. As standard (and downright simple honestly) as its individual plots can be though, they're frequently imbued with this wonderful mix of tones that pulls off this wonderful aura of mythos and melancholy. Adventures, more than any other book on the market, seems to understand how utterly sad it can be to be a walking force of nature living in a world of mortals who can never fully comprehend how you.

It also manages to be wonderfully warm at times. Far from the angsty, unsure hero portrayed in films like Man of Steel, Superman in Adventures is a genuinely good person who fights because he cares about people. The book manages to portray this in a way that avoids feeling cheesy while also adding weight to his inevitable failures. 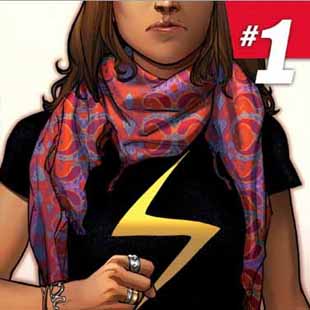 Hoping to add a few more female superheroes to my subscription box, I intentionally started reading two books this year that I otherwise might have skipped: Ms. Marvel and She-Hulk. I was overjoyed to discover that both books were delightful read and immediately burned through their backlogs like a Hollywood producer through a box full of good scripts. I knew, in turn, that I wanted give one of a spot on my end of the year 'best of" list. The big question, of course, was which one?

In the end Ms. Marvel just edged out She-Hulk. As much as I love the writing, characters and art in the latter, Ms. Marvel has just consistently struck me as a fresher and more overall impressive series. Kamala Khan is an infectious lead who, thanks to G. Willow Wilson's fantastic writing, is constantly coming out with thoughts and dialogue are both funny and real feeling. Add in the mutli-cultural elements of the book and uniqueness of that bring to the table and you simply have a must read that Marvel Comics should be proud to be publishing. Would I still recommend you read She-Hulk Absolutely. Charles Soule's run on it has been incredible. If you can only pick one though, I'd veer in the direction of Ms. Marvel. 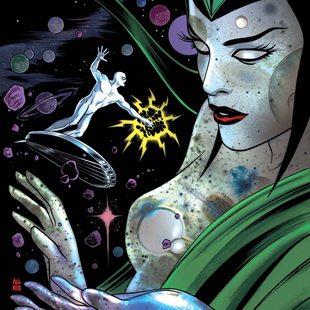 Prior to the launch of Dan Slott's Silver Surfer, my interest in the character was null. It's amazing how one good series can reverse that because, as of today, Silver Surfer is probably one of the books I look forward to most each month. Opening with a chance encounter that leads to the abduction of ordinary Earthling Dawn Greenwood, the book follows the two as they embark on a series of space adventures that run the gamut from action-packed to downright odd.

The real highlight of the book is the relationship between the Dawn and the Surfer. The two start off as complete strangers, but Slott imbues them with this natural chemistry that just makes you wish the entire comic was nothing but the two of them endlessly bantering back and forth with each other. On paper they come across as completely incompatible. In practice though, they just click and do it in a way that feels more genuine and heartwarming than I ever would have expected from a superhero I'd always imagined to be aloof and uninteresting. Plainly put, if you like weird sci-fi adventures ride with comedy and lovable character interactions, Silver Surfer is one of the best books on the market. 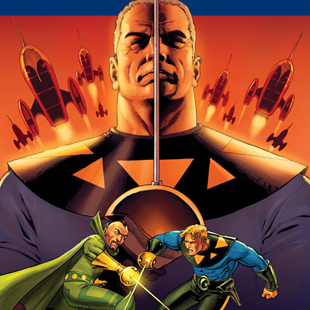 Starlight, most basically, is a book about an old man trying to mourn the death of wife by reclaiming his glory days. It's also an epic space opera involving an enslaved planet, starships, a pink haired space kid, sword fights, laser cannons and a rebellion fighting hopelessly against an alien tyranny.

It's pretty much one of the best comics I've ever read and if it hadn't ultimately disappointed me, it would probably be my favorite ongoing series. And don't get me wrong, it didn't disappoint me because it ended badly, it disappointed me because it ended at all. In a mere six issues, writer Mark Millar managed to create a universe and characters that were intensely interesting and I wasn't ready to be done with them when the final issue came to its, admittedly, perfect close.

If you've ever liked Star Wars, Buck Rogers or Flash Gordon, the adventures of Duke McQueen are a must read. They're the best thing that Mark Millar has ever done and easily one of the best comics of 2014.

Recommended Issues: All of them. 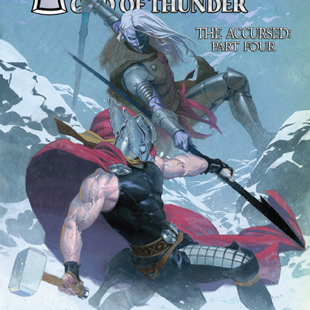 Thor: God of Thunder ended 2013 on something of an average note. While The Accursed storyline was fine, it wasn't fantastic, especially in comparison to the stellar Godkiller and Godbomb arcs that came before it. Luckily, Jason Aaron turned this back around completely in 2014 starting with a great single issue and then following it up with The Last Days of Midgard, a story that was, hands down, the best thing I read in 2014.

And while I could easily point to the story's intensely epic nature as the thing that made it so memorable, the real draw of the story is just how well Aaron balances the spectacle of a geriatric Thor battling Galactus with the more quiet tale of present day Thor's failure to save a small town from the machinations of an evil corporation. At the end of the day, it's Jason Aaron bringing his A game to a character he just seems to perfectly understand. It made him a writer I follow and I can't think of another book more deserving of my top spot for 2014.