From Starcraft's humble SCV to MechWarrior's lumbering BattleMechs, humanoid mech robots have been a staple of science-fiction videogames for years. Mech movies, like Pacific Rim, also serve to show us the fearsome power of these giant walking tanks. Unfortunately for those of us living in the real world, the BigDog, a kind of robotic pack mule, is the closest thing to a mech that the military has ever produced, so we probably won't be seeing BattleMechs stomping across the battlefield anytime soon. But that's exactly what videogames and movies are for: making the impossible possible, be it letting you live out your fantasies of crushing tiny men under your ten-ton iron boot in Titanfall, or watching giant mechs fight giant monsters in Pacific Rim.

But that's exactly what videogames and movies are for: making the impossible possible

Many attribute the creation of the mech to Activision's MechWarrior series, but the origins of these giant death machines actually go back further, and are from a completely different medium. If you want to get technical about it, the very first appearance of a mech in media was the 1880 Jules Verne novel La Maison à Vapeur (The Steam House), which featured a steam-powered, piloted, mechanical elephant. But mechs as we know them came to us from the land of the rising sun. "Mecha," from the Japanese Meka (メカ), an abbreviation of the English "mechanical," is one of the oldest genres of Japanese anime and manga, dating back as far as 1956's Tetsujin 28 GO, which some of our grayer readers may recognize as Gigantor - its English release name.

You may argue that the robot in Gigantor wasn't technically a mech, because it was controlled via remote and not a live pilot. For these purists, the first real mechs surfaced with a little known manga called Mazinga Z in 1972. Never heard of it? I wouldn't be surprised. It saw only moderate popularity in Japan, and never really made it to the West. No-one can argue though, that the real mech revolution started when Mobile Suit Gundam made its debut in 1979.

Gundam is unquestionably the father of modern mechs, introducing the world to pilotable humanoid robots fighting in an intergalactic war. It has spawned countless copycats, spin offs, and sequels. Gundam is so universally loved and recognized in Japan that you can actually visit a sixty-foot-tall life-size Gundam statue in the heart of Tokyo. Gundam also split the mecha genre into two main subgenres - Super Robot, which features robots with magical powers fighting magical monsters, and Real Robot, with mechs that are (slightly) more grounded in reality. 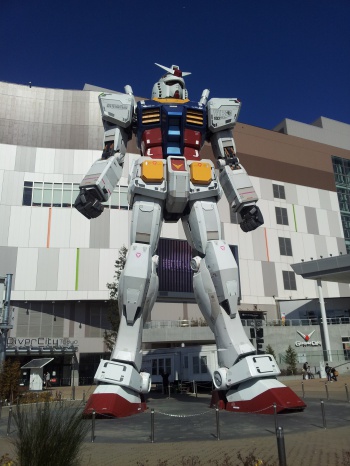 Understandably, some of the first mech videogames were actually Japanese arcade games based on the Gundam franchise. Even the original Metal Gear was released in Japan in 1987, two years ahead of the first MechWarrior, and featured the titular Metal Gear mech. The Japanese were playing with mechs back when the rest of us still thought that tanks and jets were the coolest a war machine could get.

When it comes to mechs in videogames, no developer has greater love affair with the metal monsters than Metal Gear creator Hideo Kojima. What's most interesting about Kojima's work is that he has worked with both western and eastern styles of mechs. Metal Gear Solid features the very western-style Metal Gears - weaponized military goliaths that are more functional than stylish, but his lesser-known Zone of the Enders franchise clearly draws inspiration from mecha anime like Evangelion and Gundam.

To give MechWarrior credit where it's due, it was almost single-handedly responsible for propelling the mech into popularity in Western videogames. MechWarrior made its debut in 1989. But MechWarrior is actually based on the BattleTech series of tabletop games, launched in 1984, which were themselves based on Japanese mecha anime such as Macross. While it is true that Western films like Star Wars, with its iconic AT-AT, and Aliens ("Get away from her, you bitch!") made use of mechs, it wasn't until MechWarrior that we started to see them become a mainstay in games. Also, as opposed to all the Gundam tie-ins of questionable quality, MechWarrior was a really fun game. Its complex controls, punishing learning curve and advanced (for the time) graphics really made you feel like you were piloting one of the thirty-foot steel monsters in an actual battle.

Subsequent installments into the MechWarrior series refined the mech genre of videogames. MechWarrior 2 in particular is often considered one of the greatest mech games ever made. Players had to manage the legs and the torso of the mech independently, keep an eye on heat gauges, and tactically account for the mech's slow movement and maneuverability. It was like a flight simulator, but for mechs. Unfortunately licensing issues with BattleTech arose shortly after 2000's MechWarrior 4, and forced the series into an indefinite hiatus (though it has recently resurfaced with MechWarrior Online).