I just finished playing the Crusader through level 58 on Expert, successfully killing Malthael in the process. I am no Diablo III expert by any means, but playing the new expansion class sure made me feel like a lot more of a badass than I probably am. It was a heck of a lot of fun, and it got me to thinking that the Crusader plays very much like a superhero, with me as his alter ego.

So here are a few tips on playing the Crusader like, well, an Avenger if you will. If you are looking for a guide that min-maxes stats to death, then go elsewhere. This is more to offer a few thoughts and observations on how to have fun with the class as you level the character up, and then continue to play through adventure mode, while feeling super at the same time. As a side note, it helps to have a level 60 or above with lots of gear and gold in your Stash. Each superhero is great on their own, but they can all use a Nick Fury benefactor. 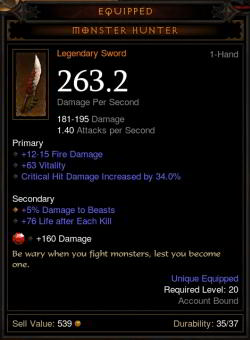 1) An Agent of Shield: Several of the Crusaders abilities are based on using a shield. Much like Captain America, he can still pull his weight without it, but he is much more of a bad ass when he has one. Abilities such as Shield Bash, Shield Glare and Blessed Shield, with corresponding runes such as Crumble, Emblazoned Shield and Shattering Throw, can often stun and immobilize targets, giving you the extra breathing room to get out of the way or regenerate a bit of health and wrath. It will also make your Avenging Crusader get his Steve Rogers on rather quickly. Having a good shield at all times, while not imperative, is key to keeping your Crusader dishing out -- and mitigating -- damage on a regular basis.

2) "Hulk Smash": The Crusader is already fairly powerful in his own right, but if you have been playing Diablo's end game prior to the expansion (and since the Loot 2.0 patch), you probably have already collected several legendary weapons. Just some brief adventuring by that maxed out character can lead to top tier gems, which can be added to a low-level Crusader's gear to make him an unstoppable force. I found a Legendary sword with a socket at level 20, and with a marquis Ruby added, the weapon had me carving through Champions and Elites with ease. That weapon lasted me through level 44, when I finally got a better Legendary.

3) "Whosoever Holds This Hammer ...": Or sword, or mace, or any other weapon for that matter (except bows -- sorry Hawkeye fans). The Crusader is talented with almost any weapon, and the Heavenly Strength passive allows the character to wield any two-hander in one hand while still using a shield. When you add in the fact that several of the Crusader's abilities call down lightning from the Heavens that can spread out among numerous foes, the Crusader bears a striking resemblance to Thor in more ways than one. Blessed Hammer, Justice, Fist of the Heavens and Falling Sword are all abilities I loved using to devastating effect.