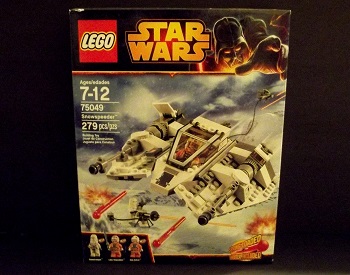 The Battle of Hoth, to this day, remains one of the most exciting and well done action sequences in film. It showed audiences just how unstoppable the Empire could be and how truly desperate the struggle of the Rebels was. It also spawned probably one of the most of the iconic images in Star Wars: the tiny Rebel Snowspeeders tripping up enormous AT-ATs with tow cables that we're going to assume were not even remotely intended for that sort of job. In the greater context of the movie it wasn't really that huge of a scene. Even so, the Snowspeeder became and remained a favorite among Star Wars fans for years to come.

It should serve as no surprise then, that the LEGO Company's ever-expanding Star Wars line would include a set based on the famous vehicle. I recently got my grubby hands on one of them and documented the building process as I experienced it for your pleasure.