With the recent announcement of Halo Wars 2, fans are excited to finally see a sequel to the original 2009's Halo Wars, which was was built from the ground up for the Xbox 360. The first ever Halo real-time strategy game was praised for its attention to detail and excellent use of the console's controller-something that was inevitably the pitfall of previous attempts to bring the RTS genre to home consoles.

Halo Wars has sold more than one million copies worldwide, making it the best-selling real-time strategy game on a console to date. However, while many Halo fans touted it for bringing the RTS genre to the Halo universe, the game wasn't without its problems.

(Didn't play the original? Here's the Zero Punctuation review from back in 2009.)

Halo Wars 2 is set to land Autumn 2016. Here are 5 ways the sequel needs to improve over the original. 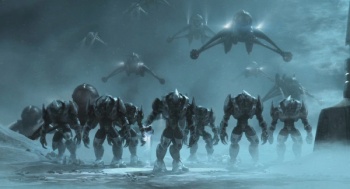 One of the most prominent issues in Halo Wars was how unbalanced it was. Claims were made that the game had a "rock, paper, scissors" system, where, in very stripped down terms, infantry beats air, air beats vehicle, vehicle beats infantry. However, this was disrupted by the fact that humanity's tank, the Scorpion, almost always beat any other type of unit in casual games, to the point where most online matches were won simply by producing armies of Scorpions and demolishing the other player. Even throwing in a few Cobras, an anti-vehicle unit, didn't seem to do much when you're faced with several of your opponent's Scorpions.

It never really feels like there's much incentive to use other units, as they're just so effective against most units, excluding aircraft.

Other massive imbalances come in the form of how units attack. The UNSC's anti-infantry unit is the Hellbringers (or UNSC Flamethrowers, as the game refers to them), which are a pair of marines equipped with - you guessed it - flamethrowers. The problem, however, is that they need to get up close to their target to start dealing damage, while the Covenant's anti-infantry unit is a pair of Jackals with carbines, which are able to deliver ranged attacks.

Similar arguments can be made of other units in the game, as well. The Covenant's anti-air unit is an air unit itself, whereas the UNSC's is a ground vehicle. Hunters, which are infantry, are anti-vehicle units, thought the UNSC's equivalent is the Cobra, a vehicle. While I'm on the fence myself in regards to how unit types for each side's counter units affects the balance, as one could argue these differences make sense from a lore perspective and also add some variation in how people play when taking on each faction, I can't deny that some units in the original are poorly balanced against each other.

This is a hard place to make recommendations, isn't it? We need to see some major changes in the sequel to ensure no one unit feels overpowered or underpowered. Outside of differences in various numerical values, balancing units could be achieved in a way that profits creative thinking and strategy deeper than what was seen in the first game, such as giving units non-offensive abilities that give them an edge, whether tactical or combative, over others that would traditionally be considered very powerful in comparison.