3. Giving Orders on the Battlefield 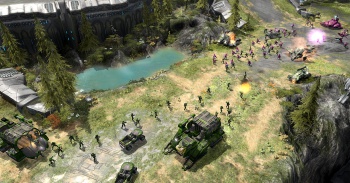 Ordering your units around the battlefield worked in Halo Wars as a whole, though there were some areas it needs some improving on. You could select all units, all units on the screen, paint over with a radial mark which units you'd like to select and, finally, could select units types from those already selected, by tabbing through them.

This was fine in most cases and made the best of the restrictions of a controller, which was great. However, there was no way to create squads or teams, or select a specific number of units or unit types. Have 10 marine units and only want to send five to harass your opponent's base? If they're close together, you'll have to separate them, so you can use the radius tool without accidentally selecting too many. What a pain.

This was one of the major issues of the original. You were given a few good means of selecting and moving units on the map, though at times it was a major frustration when trying to select only a small handful amidst an army.

The sequel would do good to keep its predecessor's selection tools, though should add some extra functionality to dispel the frustrations seen previously. It would be great if there were a way to select only a certain number of units or unit types, either through some new control scheme, such as making it so holding down the trigger while pressing a button performs another action than just pressing the button on its own. Voice commands could also be useful, as seen 2008's Tom Clancy's EndWar, which would allow you to issue move orders and attack commands with a series of simple elements like, "Unit 1 attack Hostile 6,", "Unit 5 secure Alpha," and so on. A similar system could be implemented here, allowing players to issue orders vocally, specifying which units, how many of them and what to attack to where to move to, as well as other tasks, such as base building, unit production and more.

This would, of course, have to work in tandem with the established control scheme, with the voice commands filling in where the limitation of RTSs on consoles is most prevalent.