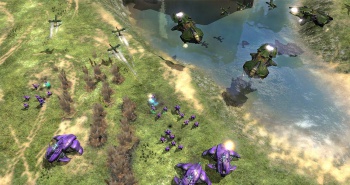 In the original, you could upgrade your units in various ways, as well as upgrade your base's turrets and purchase upgrades that affect all units, such as increasing the movement speed of infantry or reducing the time it takes to produce units.

This was all well and good, but they were linear and didn't offer much room for strategy or thoughtful decisions with regards to them. Each subsequent upgrade was always better than the last or generally continued to improve the unit if other upgrades were retained, such as in the case of the Warthog, where the first upgrade adds the turret, the second adds a marine with a grenade launcher, with the last switching the turret out with a gauss cannon.

Upgrades, whether for specific units, your base or otherwise, should put you into a position of choosing what is best for your play style or strategic outlook at that moment or on that map. We shouldn't see just linear progression, but an upgrade tree, akin to those found in other games with RPG elements, that gives you a good reason to choose one upgrade over another. Some upgrades might increase your offensive stats, another might increase your defence, while others play a different role altogether, steering away from combat bonuses.

A marine unit might gain the ability to mount Scorpions or other vehicles-as seen in the mainline games-as both a way of dealing more damage with the increased firepower from their assault rifles and as a means of getting them to from point A to point B faster and safer than they would have been on foot.

While some units in the original do offer upgrades that increase their defense or movement speed over attack damage, these upgrades are unlocked later and can't simply be chosen prior to getting access to the preceding ones.

As an extra point, many fans want to see a Covenant single-player campaign in the upcoming successor. Players got the chance to play as the antagonistic Covenant during the original game's Skirmish and multiplayer modes, though they weren't playable in the single-player campaign. It isn't a major want on my part, but it couldn't hurt and would be a neat addition.

It's crazy to think Halo Wars 2 is a little more than a year away, given the ballpark release date. The original Halo Wars was a big leap forward and proved that, given proper insight and forethought, a real-time strategy game can work well on a console, as long as you take into account the inherent limitations of a controller over a mouse and keyboard setup.

It's unclear how things are going to pan out with the game seeing a release on Windows 10, as well as on Xbox One. Will the PC version be a simple port of the console one? Or will we see big differences across platforms, with Windows 10 having a more traditional RTS control layout and design elements, and the Xbox One getting a controller-friendly equivalent?

These are all things that I'm keen to hear answers to. The possibility of cross-platform play also comes to mind, though this will surely hinge on whether or not each version of the game possesses a completely different approach to design and how it controls.

Halo Wars was a damn fine game. It had its problems, as I've outlined here, but it got so much right in terms of being a console RTS, as well as bringing the genre to the Halo universe, with iconic staples of the series, like Scorpions, Warthogs, Spartan supersoldiers and the evil alien races known as the Covenant, just to name a few.

It really brought the real-time strategy genre to those who wouldn't ordinarily have the chance or inclination to play it; slapping the Halo franchise on top of it helped it immensely. The original Halo: Combat Evolved was initially imagined as an RTS and not a first-person shooter, as it eventually was. And, oddly enough, Halo Wars wasn't even going to be a Halo game. It was going to be a generic RTS, though Microsoft thought attaching the Halo name to it would help its sales.

With acclaimed RTS developer Creative Assembly at the helm, Halo Wars 2 could be one of the best console releases for the genre. It just needs to bring to the table what the first game did so well, like an engaging story and beautifully crafted CGI cutscenes, and fix or tweak things that it didn't get right or could have done better.

Daniel Price is a British writer and gamer living in Sunderland, UK. He drinks copious amounts of tea and enjoys first-person shooters, the occasional strategy and survival horror games.