It's been one heck of a year in videogames. In 2015, we've seen new games in long-running series, like Fallout. We've seen indie games continue to distinguish themselves, and we've watched as even more great games were announced and promised to be here soon. Although there have been a few disappointments, on the whole 2015 was a great time to be a gamer. These are the five games that meant the most to me this year. 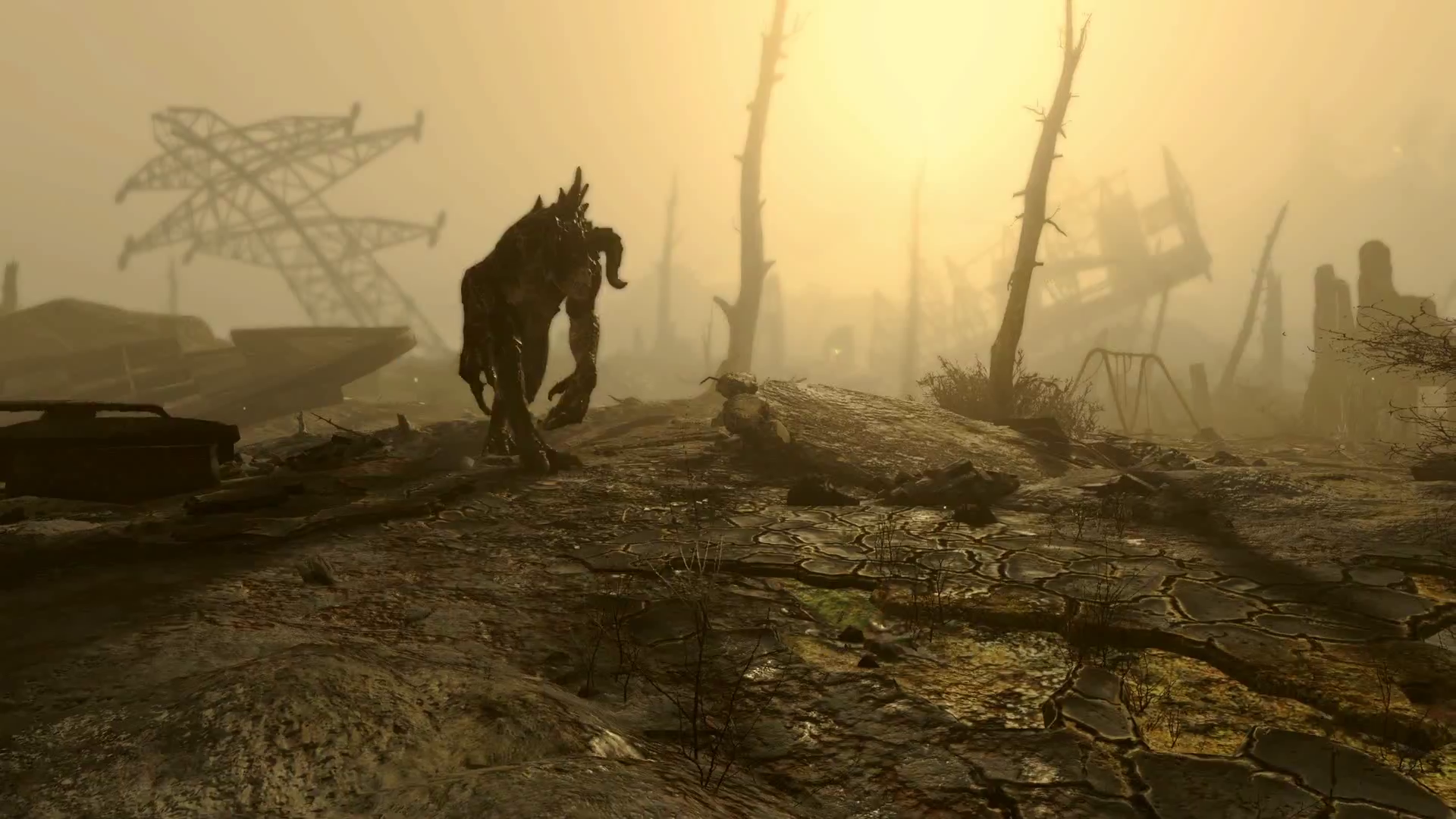 If there was a game this year that caused a bigger stir when it was announced than Fallout 4, I can't think of what it would be. The latest installment in Bethesda's post-apocalyptic series was in so much demand that there were multiple hoaxes purporting to be the announcement of the game before Todd Howard lifted the veil at E3 this year.

Fallout 4 is everything that gamers have come to expect from Bethesda's open-world games. A huge world, filled with things to do, places to see, quests to complete, and junk to scavenge. It was basically an improved version of Fallout 3 and Fallout: New Vegas, but for fans of the series, that's basically what they wanted.

Set in and around Boston 200 years after the bombs fell, Fallout 4 throws you into a world with multiple factions vying for supremacy, and leaves you to choose the one that suits you. As you progress through the game, you'll find that your choices do drive the narrative to some extent, and the endings can be quite different based on how you proceed.

There's plenty of new stuff here too. Power armor, so rationed in previous games, is now everywhere. You can acquire multiple sets, customize it, and use it to your heart's content, provided you can find enough fusion cores to power it. The shooting mechanics are the best they've ever been in a Fallout game, and there are 12 companions that are more useful than ever.

But the biggest addition of all is the ability to construct settlements. When you liberate certain areas, you can claim them as settlements, build house, defenses, farms, and more within the area, and even set up supply lines to connect them all. It's a great mechanic that can literally distract you from the story and questing for hours on end. Best of all, it's all driven by breaking down the items you've ignored in the past games in the series. Desk fans, antique globes, coffee cups, and rolls of duct tape are just as valuable now as caps (and maybe more so).

Yes, Fallout 4 features a lot of the glitches we've complained about in the past in Bethesda games, but while annoying, those glitches don't stop the game from being one of the best of the year. 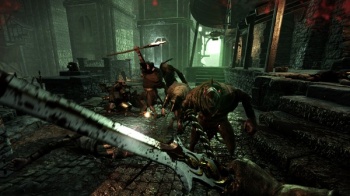 That's the short description of Warhammer: End Times - Vermintide. Developed by Fatshark, the Swedish developer behind War of the Vikings and Lead and Gold: Gangs of the Wild West, Vermintide tosses players into the world of Warhammer Fantasy during the End Times, the prophesied end of the world. The Skaven ratmen are invading and taking over entire cities, and you and up to three friends are trying to save the city of Ubersreik. It's a great premise for a great game.

First off, Vermintide absolutely nails the Warhammer Fantasy aesthetic. Everything from the characters to the ratmen to the architecture fits in the world, and it's a large part of what enables you to set this game apart from the one that so obviously inspired it: Valve's Left 4 Dead.

Like Valve's co-op zombie shooter, you'll fight your way through missions alongside three other characters (the AI will fill in the empty spots). While it certainly contains some linear missions, Vermintide mixes this up by also offering missions that task you with gathering items (like barrels of gunpowder) and returning them to a central point before escaping.

It also sets itself apart in its characters, which are different in more than just appearance. Instead of four characters that basically control and play the same, Vermintide offers five classes, each with its own unique abilities. For example, melee lovers may gravitate to the Empire Soldier, who can choose a two handed hammer or a sword and shield, just to name a couple of options. If you're more interested in keeping the rats at arm's length, the Waywatcher employs a powerful bow for ranged attacks, as well as two long knives for those that survive the initial assault.

Vermintide also adds a loot system that features multiple levels of gear (grouped by rarity) that allow you to customize your character. At the end of each successful mission, you'll get to roll to see just how lucky you are, and you'll get some sort of reward every time. Weapons and trinkets can be employed to further tune your character to your liking. Even if you don't get the loot you were hoping for, you can use the crafting system to combine or break down items to try and craft those you really want.

In short, Vermintide is a superb co-op title. It's part shooter, part first-person melee, and it's all a hell of a lot of fun. The multiple difficulty levels allow you to ramp up the challenge (and the rewards), and playing with friends is a blast. The biggest knock on the game is that the AI can be a bit frustrating when you don't have friends to play with, but filling those slots with humans quickly fixes the issue. It's easily my favorite co-op game of the year. 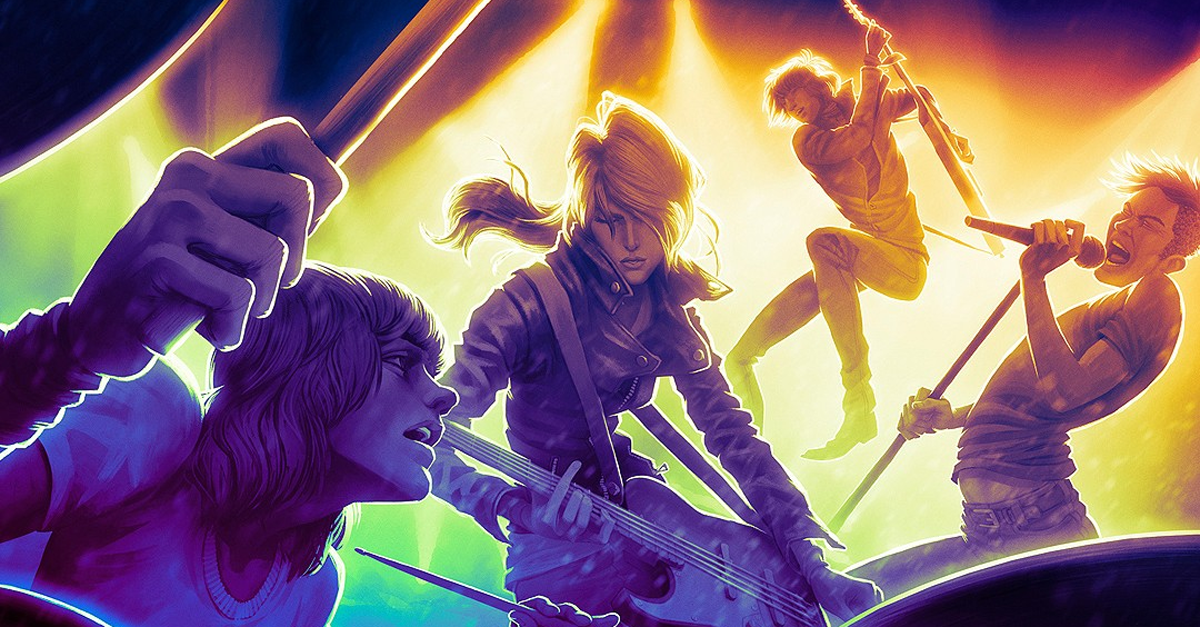 Harmonix has definitely heard that old saying: "If it's not broke, don't try to fix it." With Rock Band 4, the company decided to simplify the game, improve the interface and song selection UI, and pretty much leave everything else alone. It was the best possible choice.

Rock Band 4 takes everything that the series has done, picks the best parts, and then makes a game out of them. Gone are the various pro modes (although pro drums remains an option, if you have the cymbal add-on for it) of Rock Band 3, and online play is absent as well. Instead, this game focuses on making the experience of playing with friends in a room great, and it delivers in spades.

Although the "create a setlist" mode isn't in the game (it may be added in a future update), the system that is there is elegant. You pick a song, and at the end, all the band members get to vote on the next song. You might choose between "A song from the 80s," "A song with a female vocalist," and "A song by Ozzy Osbourne." You can also choose to end the set. In this party-focused mode, players can seamlessly jump in or drop out, making for a much smoother experience than in past games.

There are some smaller changes, like the addition of (optional) freestyle guitar solos. These allow the guitarist to create their own solo, earning points if they follow tempo guides that appear on the screen. Probably my favorite small addition is the countdown timer that appears above your notes, telling you how long it is until your next mote appears. This makes it easier to time grabbing a drink or scratching that itch on your nose.

Of all the features in Rock Band 4, none is as big as the backwards compatibility it offers. Old instruments work flawlessly, even if they aren't made for Rock Band games (my Guitar Hero World Tour guitars work great, as does my Rock Band 1 drum kit). Best of all, there's a lot of legacy DLC that's already appearing in the game, with more coming soon.

Rock Band 4 may be feel a bit stripped down, but I'd argue that it does what it does as well as any rhythm game I've ever played. Plus, Harmonix is still working on updates and additions to the formula, with a recent patch adding online leaderboards, an auto-kick mode, and improved calibration tools. It's certainly not perfect, but for Rock Band fans, it's the best the series has ever been. 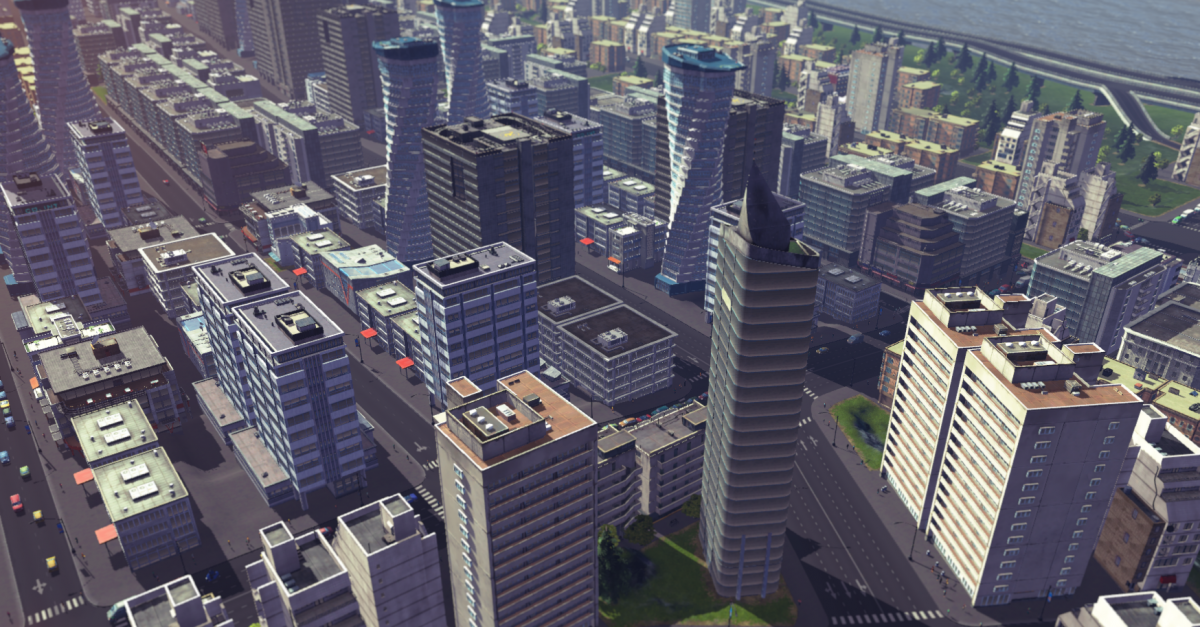 When the release of SimCity crashed and burned in 2013, fans of the city-sim genre felt a little lost. The flagship game of that genre had failed, and they didn't know where to turn. In March of this year, they got their answer. Cities: Skylines was pitched by developer Colossal Order, and greenlit by Paradox Interactive after the SimCity debacle. It took about two years, but fans finally got the game they wanted.

The gameplay is simple to grasp, and you can have a city up and running within a few minutes. Keeping that city running when it begins to grow may be a bit of a challenge, however. Traffic and infrastructure problems are difficult to avoid, and you won't believe how hard it is to make room for the hearses you'll need to remove the citizens who pass away.

Where Cities: Skylines really shines is in its presentation and UI. It's easy to get the information you need, because the game gives you a number of viewing options that let you see crime rates, pollution, electricity grids, and even wind speeds with one simple click. Building with issues (no power, no water, and/or sanitation issues, for example) will have icons appear above them that you can click for more information. Finally, there's a social media doppelganger called "Chirper" that lets you see just what your citizens are saying about your city. Sometimes it's not pretty, but hey, that's social media for you.

Most importantly, Cities: Skylines has embraced modding. The Steam Workshop for the game is running over with mods, assets, and landscapes you can use to enhance your game. Between the planned long term support (like the recent After Dark expansion and numerous DLC packs) and the modding community, you can bet that this is a game that will be relevant for quite some time.

In short, Cities: Skylines is the game that SimCity fans wanted to play, and they can get it for just $30. That's hard to beat. 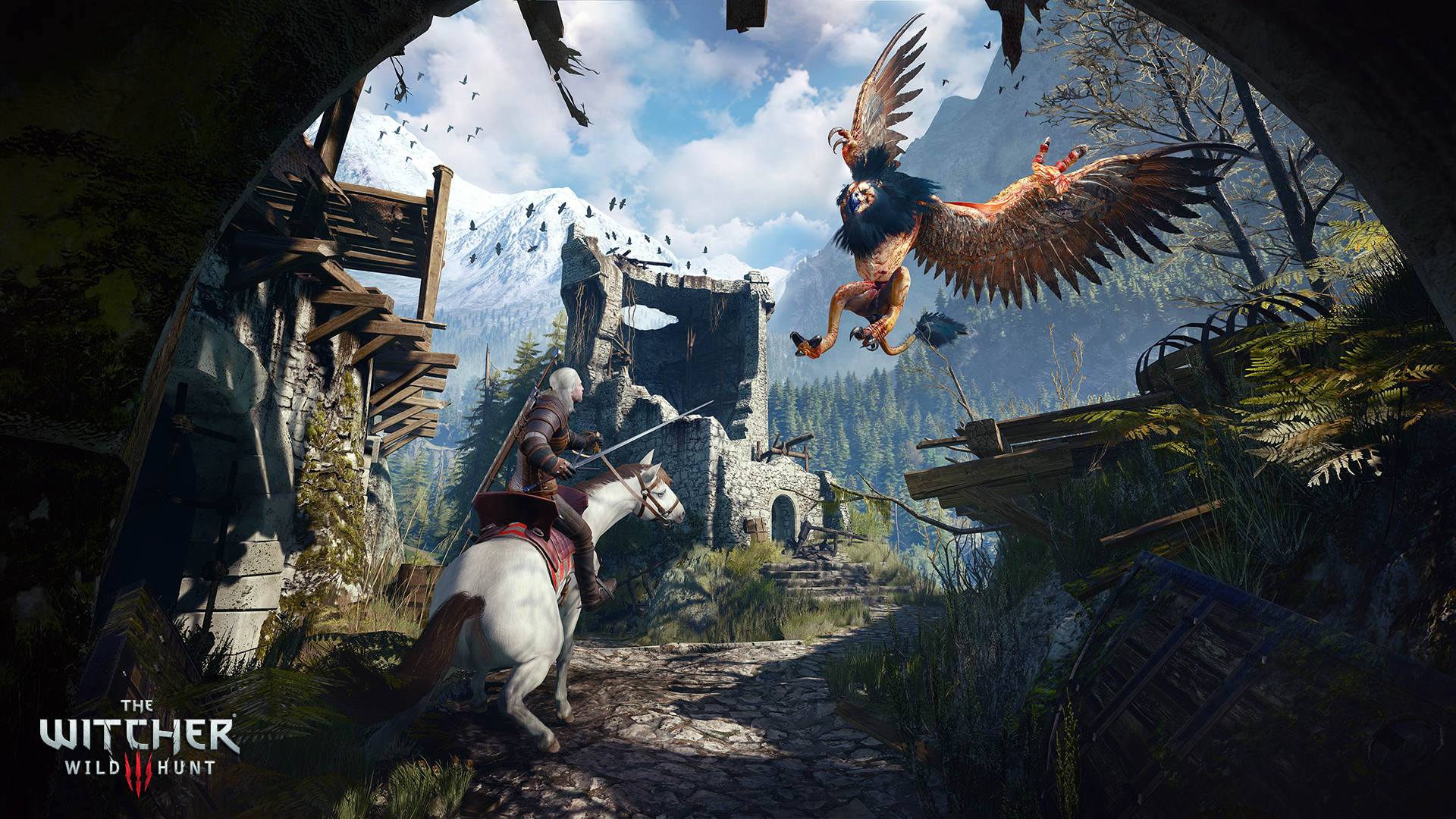 The Witcher 3 was one of the most anticipated games of 2015, and when it arrived in May, it did not disappoint. The conclusion of Geralt's adventures was a crowning achievement for CD Projekt RED. It drops you into a dark world where everything you do will affect someone, and not just in how much they charge you for supplies. Every quest, even the smallest of side quests, has weight. Every action you take feels meaningful as you try to track down Geralt's adopted daughter, Ciri.

In fact, the world is so crazy huge and filled with things to do that you'd be forgiven for forgetting about the main quest for a while. Activities like side quests, hunting, crafting, and making potions consume your time, and that is to say nothing of the game-within-a-game that is Gwent.

Basically a CCG that you play within the confines of The Witcher 3, Gwent starts out simple, and then ramps up into a masterpiece of card collecting and deck building that threatened to take over my entire playthrough. My version of Geralt probably thought things like "Ciri will be fine a bit longer. I should have time for a few more games of Gwent."

But as good as all of the aforementioned things are, where you'll truly lose yourself is the story. CD Projekt has crafted a story that you can lose yourself in, and filled it with well-designed, fully fleshed-out characters that are better than any I've seen in a game before. The Witcher 3 raises the bar on story higher than any game that has come before or since, and because of it, the game overcomes the few small gameplay issues it has to be my favorite game of 2015.