Phelps seems to think and act in a by the book, straightforward way, whether in the military or the police force. Phelps' honesty seems compelled by his guilt from WWII, whether it's the soldiers under his command dying, ordering Hogeboom to attack the Japanese in the cave, or doubting that he deserved the Silver Star. His refusal of bribes and persistent pursuit of the truth alienate him from his fellow detectives. Moreover, his college education and knowledge of Shelley's poetry help him catch the Black Dahlia killer, but don't earn him any friends among his less classically-educated fellow policemen. This biography not only details elements of pre-1947 history, but creates a sufficiently noir protagonist, constantly apart from his peers. 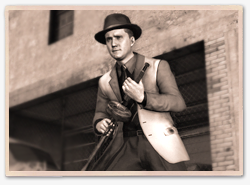 The Arson Desk cases capture the essence of what grows to be mainstream 1950s culture. The Federal government, through the G.I. Bill (1944) and the Federal Aid Highway Act (1956), subsidized the creation of the suburbs. The G.I. Bill gave favorable home loans to veterans, and freeways made living away from urban jobs feasible. Most of the country didn't have freeways in 1947, but southern California's car culture caused freeways to be built earlier there than elsewhere. As local, state, and federal governments became more active in construction, seizing existing property through eminent domain became more frequent. The Suburban Redevelopment Fund's scam exploited these state and Federal government policies. First, the government was paying for homes. Secondly, it was subsidizing transportation to make those homes more attractive. And lastly, it was paying to seize over-valued property through eminent domain. The conspirators depended on government spending, which didn't exist in such substantial amounts in earlier eras, for their plot to work.

L.A. Noire goes further and references developments decades after its setting. Ira Hogeboom, to modern audiences, suffers from Post-Traumatic Stress Disorder, a term that arose during the Vietnam War. Audie Murphy, who was rejected from military service for being too young, too short, and too light, but eventually earned the Medal of Honor, was one of the first to draw attention to what was earlier known as "battle fatigue." In the 1940s, however, Hogeboom has no resources available to him. In another reference to events decades after L.A. Noire's setting, Captain McKelty equates Leland Munroe's innocence with Richard Nixon's. In 1947, Nixon was a recently elected member of the House of Representatives serving Southern California's 12th district. The following year, he gained fame for his investigation of Alger Hiss and the Pumpkin Papers. Americans wouldn't find out about his wrongdoing for two and a half decades. Hogeboom's plight and Monroe's guilt make more sense to us, because of our 20/20 hindsight, than they would to the game's 1947 characters.

Team Bondi have earned great praise for the technical achievements of L.A. Noire, and deservedly so, but they deserve equal praise for capturing the historical context of 1947 and the decades before and after. As a history teacher and a gamer, I believe that education and videogames are natural allies. Deeper understanding of U.S. history makes L.A. Noire more enjoyable, and interest in L.A. Noire can translate to interest in history.

David has been teaching for six years, and gaming for over twenty. You can see read his thoughts on nerdy topics at http://historteacherynerd.blogspot.com/.