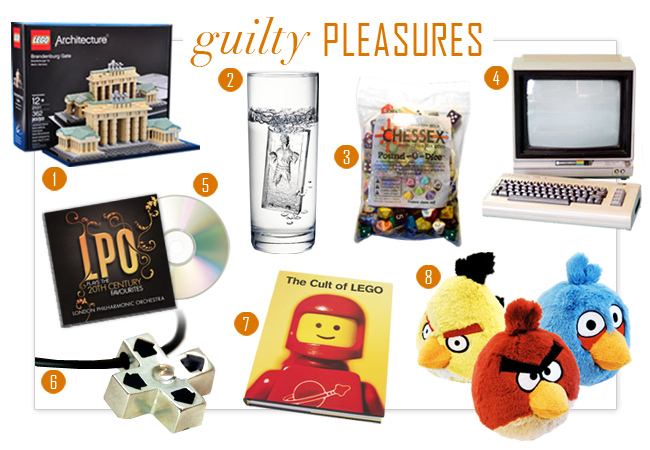 Greg Says: LEGOs aren't just for kids anymore. The Architecture series from the Danish toy company replicates famous buildings in little plastic pieces and each one combines my love for constructing tiny models and admiring these feats of engineering. The sets err on the side of ease of construction instead of one to one detail, but the finished product is still a very well-designed replication. I've had a great time putting together Falling Water and the Empire State Building, but - seeing as I'm playing the Prussians in our office Napoleon in Europe game - I couldn't resist assembling the Brandenberg Gate when it came out this fall. The LEGO architecture sets are fun project to build with your buddy over a few beers, your kid before bed or your dad when he comes to visit.

Paul Says: Add a bit of flair to your next Star Wars marathon with miniature versions of everyone's favorite frozen smuggler! This silicone tray lets you capture ice, chocolate, jelly, and more in the shape of Han Solo during his unfortunate imprisonment stuck in carbonite. The tray measures about 6 inches long x 4 inches wide x 1 inches tall, and lets those eager to remember the earlier days of Star Wars (before George Lucas started releasing special editions of everything) to create up to to 7 mini-Solos to share with friends, family, and any bounty hunters that may be lurking around your neighborhood.

Greg Says: As gaming artifacts go, polyhedral dice hold a special place in my heart. Twenty-sided dice are the most utilitarian and satisfying to roll, but I love even the pyramids of the 4-sided little guys. Nothing is more satisfying than fiddling with each one; I'm sure I annoy my neighbors at the table by incessantly tossing and organizing them. If I had my druthers, I'd swim in a huge bin of dice like I was Scrooge McDork.

While it can be fun to collect dice in specific colors or materials, sometimes quantity is better than quality. What's the best way to get a bunch of dice? Why the Chessex Pound-O-Dice, of course. You get almost 100 dice in varying colors and sizes for only $17. The Pound-O-Dice is a great gift for your buddy just getting into tabletop gaming or to spoil yourself by supplementing your own dice bag.

Steve says: Commodore's amazing 64-bit computer dominated the 1980s and I'd be willing to bet there's not a nerd over 30 who doesn't have fond memories of playing or even programming games on it. To capitalize on that nostalgia, Commodore has released a new version of the computer that maintains the look of the original but packs it with modern components. The stylish taupe exterior might look ultra retro, but this is a modern PC gaming machine, complete with a 3.3 GHz processor, 4GB of memory, a DVD drive, wireless n wifi, and every possible type of connection you could want. Commodore will even be releasing a new version of its classic OS Vision, which allows you to really dig into the 8-bit awesomeness that made the original system the best selling computer of all time. Suck it, Apple.

Paul Says: Behind every great game, there's often a great soundtrack, and in tribute of the some of the most critically acclaimed game titles in history the London Philharmonic Orchestra as recently released an album titled The Greatest Video Game Music, featuring 21 beautiful renditions of some of gaming's most well-known musical numbers. Along with selections from The Legend of Zelda, Tetris and Super Mario Bros, the album also includes orchestral versions of music from more recent games such as Angry Birds, BioShock and Mass Effect. It's a must have for anyone with an appreciation for classical music or gaming.

Steve says: It's not always easy to find a gift that's classy, feminine, and nerdy. You can usually score two out of three, but hitting them all at once? Impossible. At least, it was until I stumbled across MyJewelryShop's adorable 8-bit pendants. From the more subtle hearts, which say "I may be in the wedding party but I'm still a gamer," to the more obvious Mario and Triforce pendants, which say "Is there wifi at your church?" these pendants are suitable for just about every occasion. Even if you're not a fan of Nintendo, there's a straight-up D-pad pendant for you ladies to proclaim your agnostic console love, and even a Minecraft Pickaxe for you PC gaming types. You may be a lady, but you're also a gamer, and it's time the world saw both sides at once.

Steve says: I knew when my kids were born that my Legos no longer belonged to me and, now that I've passed my collection on to the next generation, I'm reminded of just how amazing those little bricks are. Lego is more than one of the world's most popular toy brands; it's a way of looking at the world, a way of taking whatever you can dream up and making it real. Short of actually diving into a bin of pieces yourself, nothing brings that point home clearer than the new book, Cult of Lego. Filled with page after page of original and often surprising creations, Cult of Lego celebrates the infinite possibilities contained within those little plastic bricks, proving that play can be anything you want it to be. I defy you to read it and not be inspired to start working on your own creations.

Susan says: Someone you know loves the Angry Birds. It might be your mom, your little brother, or even you, but if you are acquainted with people, someone in your sphere of influence undoubtedly adores those small, perturbed avians and has a favorite among them. I personally like the Red Bird the best, because his eyebrows are so very irate. Others prefer the Black Bird, because he does the most damage. I'm sure someone out there loves the White Bird, though I couldn't begin to understand why. Seriously, he's practically useless. Cover all the Bird-loving bases with this collection of Angry Bird plushies, which you can happily fling across the room without fear of breaking any glass, wood, or pigs. Use of slingshot optional, but obviously preferred.
Related to:
the escapist staffbatman arkham citybooksbuyers guidecall of duty modern warfare 3dance central 2deus ex human revolutionlegend of zelda skyward swordlittlebigplanet 2minecraftmoviespcportal 2ps3skyrimtotal war shogun 2video gameswiixbox 360
0
Tweet