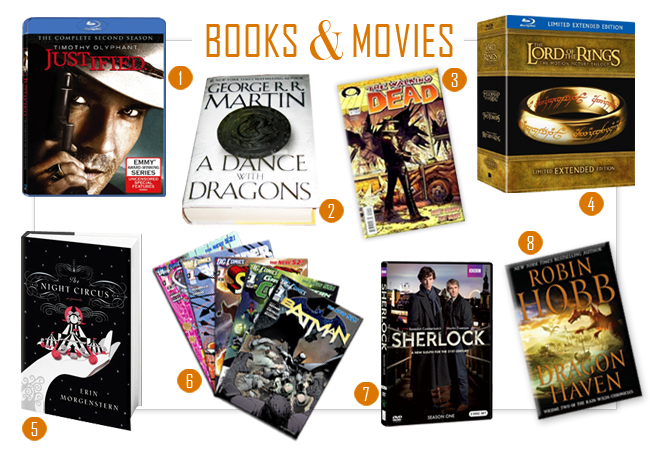 Susan says: Timothy Olyphant leads an exceptional cast in Justified, which tells the tale of deputy U.S. Marshal Raylan Givens as he tries his best to clean up Harlan County, Kentucky. It's an area of the country that tends to get overlooked by dramas that prefer the glitz and grime of more urban settings like New York or Los Angeles, but the location among the trees and mountains of Appalachia is key to the series' character. The people of Harlan County don't have many options when it comes to earning a living, and it's not hard to understand why families like the Crowders opt to deal drugs instead of slogging in the coal mines. Raylan grew up alongside the very people he's trying to put away, and isn't exactly a tower of virtue himself. The complex relationships between law and lawless make Justified so watchable, but it's the show's sense of humor that keeps it from ever becoming bleak. You'll tear through Season One in a single sitting; fortunately, Season Two comes out on January 3rd.

A Dance with Dragons: A Song of Ice and Fire: Book Five

Justin says: While we often joked around the office that it may never actually see the light of day, book five in George R.R. Martin's fantasy series did in fact come out this summer. Coming off the heels of the arguably weaker fourth book A Feast for Crows, which focused on a number of new point of view characters, it was great to see a return to many of the characters that we had all originally so heavily invested in years before. You'll certainly enjoy A Dance with Dragons if you're already a fan of the A Song of Ice and Fire series, but it's also worth a look if you like dark or medieval fantasy, though you'll want to start with book one, A Game of Thrones, first for all the context.

The Walking Dead Compendium One

Paul Says:This massive tome collects issues #1 through 48 of Robert Kirkman's award-winning monthly comic book series, detailing the struggles of Rick Grimes, a former Kentucky police officer leading a group of survivors in the aftermath of a zombie apocalypse. With a heavy focus on characterization and the struggle to stay alive after the horrific collapse of civilization, The Walking Dead is an excellent read for any survival-horror aficionado or fan of George Romero. Over a 1000 pages long and weighing in at approximately 5 pounds, The Walking Dead Compendium One also makes a pretty decent improvised weapon in the event you have any unexpected undead guests.

The Lord of the Rings: The Motion Picture Trilogy Extended Edition Blu-ray

Justin says: While technically the films have been available on Blu-ray since last year, let's face it. If you're buying Peter Jackson's epic presentation of J.R.R. Tolkien's classic fantasy series for the very latest generation of media, then you're probably the sort to appreciate the approximately 2 hours of extra footage in addition to the practically countless more additional features like commentaries, documentaries, galleries, maps and more. There are in fact 4 separate commentaries - directors, design team, production/post-production and cast. If you've ever been interested in what lengths people must go to make some of your favorite films, then you'll love these extra features. Buy Extended Edition Blu-rays for yourself or a special someone on your shopping list if you're fans of the novels or even just the films. Though in the latter case I heartily recommend checking out the books or giving them a second chance, it would certainly make for good dual theme present of film and novel.

Susan says: Two magicians, trained since childhood to compete against each other in a fierce duel, fall in love against the backdrop of Le Cirque des Rêve, a bizarre circus that appears suddenly, without warning, and is only open at night. This is no ordinary collection of clowns and elephants, though; brass dragons, graves, curious cats and more await your arrival. Venture into The Night Circus game if you'd like a taste of Erin Morgenstern's imaginative setting before picking up a copy of the book. Great for that someone on your gift list who's read Harry Potter so many times they practically know it by heart.

Steve says: Comics continuity is a double-edged sword. On the one hand, it provides readers with rich layers of history and connection between characters and events. On the other hand, it can sometimes alienate new readers who aren't sure why, or even if, they should care about what's happening. Earlier this year, DC attempted to roll things back by resetting its entire line of monthly issues and starting over with 52 separate series. From Superman and Batman to O.M.A.C. and Blue Beetle, the whole pantheon of DC heroes are getting a fresh start with a streamlined continuity that's intended to be very friendly to new readers. While the whole thing will probably start getting satisfyingly complicated again soon, this is an easy way to get in on the ground floor with some of comicdom's most fantastic heroes. And now that DC has its own digital storefront, you can get them all without ever leaving your house.

Susan says: Sherlock Holmes is one of fiction's most enduring characters because he's such a wonderful collection of contradictions. He's brilliant, so we should admire him, but he's a complete jerk, so we should shun him. We want him around because his insight is invaluable, but he's such an insufferable git that we wish he'd just go away. This BBC update cleverly adapts Holmes' quirks to modern times, working him seamlessly into an era of texting and internet searches, while adding intriguing questions about the detective's sexuality and potential sociopathy. Benedict Cumberbatch is positively dazzling as he digs into Holmes with an electric ferocity, and Martin Freeman makes for a fascinating Watson. There are only three episodes in the entire season, and the second is bit weak, but the third episode - in particular the ending - will leave you shouting for more.

Greg Says: Over the last few years, Robin Hobb has quietly become one of my favorite authors and I eagerly await her novels each year. The Rain Wilds Chronicles is trilogy about a hopeless trek of stunted dragons and their mutated masters searching for an ancient city where humans and dragons once cohabitated in splendor. The first two books, Dragon Keeper and Dragon Haven, are out now, with a third on the way this winter. While clearly fantasy - I mean, dragons, right? - what makes Hobb's writing so powerful are the fascinating characters. Hobb is one of the few fantasy writers I know who portrays human sexuality evenly, many of her characters are homosexual without verging into melodrama or stereotype. For those interested, the Rain Wilds Chronicles is part of the world described in Hobb's previous trilogies - Farseer, Tawny Man and most directly the Liveship Traders - but it's not necessary to read those before diving into this story. If you have a fantasy fan on your list who is tired of the same old swords and sorcery, a paperback copy of Dragon Keeper is a great stocking stuffer.
Related to:
the escapist staffbatman arkham citybooksbuyers guidecall of duty modern warfare 3dance central 2deus ex human revolutionlegend of zelda skyward swordlittlebigplanet 2minecraftmoviespcportal 2ps3skyrimtotal war shogun 2video gameswiixbox 360
0
Tweet