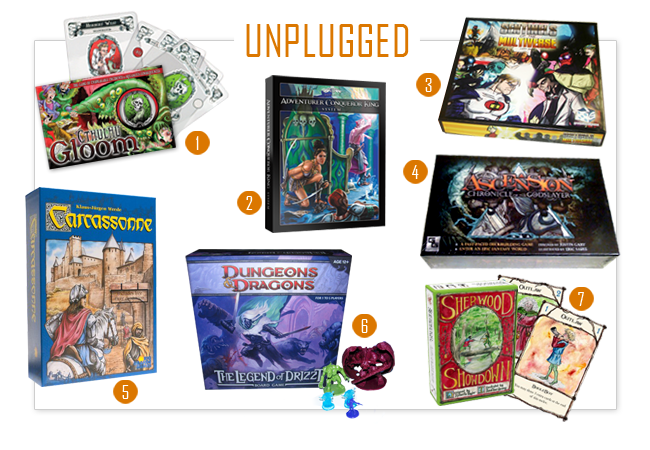 Susan says: The card game Gloom turns typical game mechanics on its ear by making failure the only way to win. Each player adopts one of the game's charmingly unusual families, then does their best to make the members of that family as miserable as possible before killing them. Besetting your family with all manner of woes - while playing happy events on your opponents - is fun enough by itself, but the real joy of Gloom comes from players working together to create a story that manages to stitch the various elements together. Actually winning the game becomes secondary to telling a good - and usually hilarious - story. Cthulhu Gloom keeps the game's mechanics and adds a Lovecraftian twist by sprinkling Elder gods and magical tomes amongst the unfortunate happenings with which you can assault your family members.

Justin says: Adventurer Conquer King at its core is much like many of the tabletop roleplaying games you know and love. You'll gather around a table with character sheets and pencils in hand. You'll even roll dice, praying for 20s and bemoaning the 1s, but what primarily sets ACKS apart from other similar games like say Dungeon and Dragons is that it expands character levels beyond just sequential statistical improvement. You follow your characters from the dredges of dungeon crawling, their rise as heroes and finally cementing themselves as leaders and rulers connected to a setting beyond simple for-hire pest extermination or maguffin retrievers. You'll most enjoy ACKS if you're the kind of player or DM that likes their settings to feel like living breathing worlds beyond just the characters line of sight. Want to know how many ships are available for sale in a medium sized town and how long it would take to gather a pirate crew? ACKS has an answer for it.

Sentinels of the Multiverse

Paul Says: Want to form your own Justice League or Avengers team, but noticed that you and your friends are kind of lacking in crime-fighting prowess, high-tech power armor or the ability to shoot lasers out of their eyes? Then you need to pick up Sentinels of the Mulitverse, a cooperative card game by Greater Than Games. In Sentinels, 3 to 5 players control a super hero team as they take on a devious super-villain out for world domination. The game features 10 heroes, each with their own unique abilities, 4 different environments decks where their fight against evil takes place and 4 villains introducing a variety of challenges and minions for players to defeat. There's tons of replay value, as no two games play the same and players have plenty of opportunity to switch up their tactics with the different heroes.

Ascension: Chronicle of the Godslayer

Paul Says: For those who aren't interested in teamwork but rather crushing their friends in a 'friendly' competition, there's Ascension: Chornicle of the Godslayer by Gary Games. Taking place in the world of Vigil, players compete to recruit a powerful army composed of heroes from all kinds of other worldly dimensions in order to take on the mantle of Godslayer and defeat the god Samael and his monstrous hordes. Ascension is fast-paced deck building card game for up to four players, with 200 cards and a great deal of replay value. There are also two expansions available to add even more variety and mechanics to the game. If you're not too much of a fan of card games, there's also a digital version of the Ascension available for the iPhone and iPad.

Greg Says: Named after a French city known for its spectacular walled fortress, Carcassonne is a competitive board game where you place city tiles and "claim" features like roads and fields/farms with little wooden dudes called meeples. Like many German-style board games of the last decade, the rules are deceptively simple - there's a complex strategy behind when and where to place your meeples. The basic game is great fun to play with people who may be scared away by intense rules, and even the iPad application translates the experience really well. But I suggest you buy a bunch of zombie, ninja and monster meeples to play Carcassonne with? That just makes it more fun for everyone.

Dungeon & Dragons: The Legend of Drizzt Board Game

Justin says: Sometimes you just don't have the time to lovingly craft a setting, characters and adventure or maybe you're more of the sort who like the game aspects of tabletop more than the roleplaying side. The Legend of Drizzt continues the series of D&D based board games that Wizard of the Coast has been putting out. They play roughly like Diet Dungeon and Dragons: the dungeon builds itself, monsters are run in tandem by the players and rules have been pruned down to be easily understood by almost anyone. The Legend of Drizzt pulls its adventure ideas from R.A. Salvatore's Forgotten Realm series and follows everyone's favorite, or despised, drow ranger. A few of them actually further expand the normal cooperative nature of the game, forcing you to play two teams that must work together but are not ultimately required to see the other side through to win. You'll enjoy The Legend of Drizzt if you're a fan of the novels and want to take control of characters like Drizzt Do'urdon or his assassin rival Artemis Entreri.

Susan says: The holidays are a time when you get together with your extended family, then quickly try to find a way to get away from most of them. Ok, maybe that's just at my house. Sherwood Showdown is the perfect way to spend a little one-on-one time with someone you love and want to rob blind. A card game designed specifically to be played by two players, Sherwood Showdown places you in the role of Robin Hood and his Merry Men, robbing unwary travelers. The rules are simple and just a few hands is enough to turn a new player into a shrewd strategist. Though it's fun with anyone, Sherwood Showdown is even better when you know your opponent well enough to predict when they're bluffing.
Related to:
the escapist staffbatman arkham citybooksbuyers guidecall of duty modern warfare 3dance central 2deus ex human revolutionlegend of zelda skyward swordlittlebigplanet 2minecraftmoviespcportal 2ps3skyrimtotal war shogun 2video gameswiixbox 360
0
Tweet