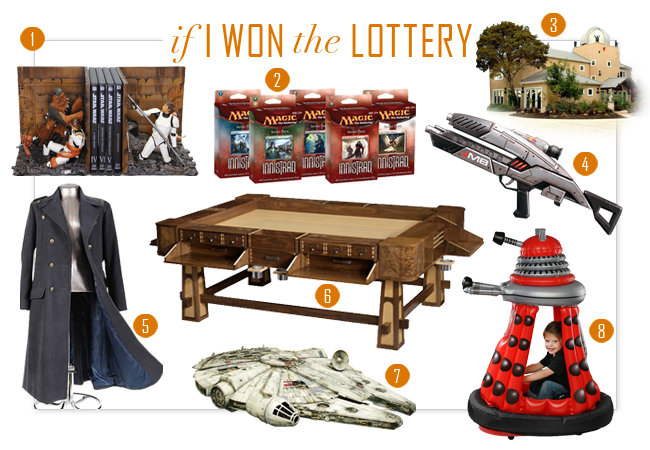 Greg Says: If you grew up loving sci-fi or fantasy in the last 30 years, it was hard not to love Star Wars. The first three movies were such an iconic part of that era and not even the subsequent prequels and George Lucas' tampering can douse our affection for Han Solo, Princess Leia and Luke Skywalker. The trash compactor scene always felt like an anomaly for me where the tone shifted into monster movie suspense, but I admit I laughed the first time I saw these bookends because the pose fits so well with what bookends are meant to do. If you got a spare 200 credits, I'm sure a Star Wars fan wouldn't turn down using Luke, Chewie and Han to hold up their books, games or movies on the shelf.

Justin says: In addition to running a few campaigns of ACKS during our lunch hour, we here at The Escapist will generally get to together once a week to play Magic the Gathering. The collectible card game has seen a bit of a resurgence in recent years, which some attribute to the Duels of the Planeswalkers games. With new sets hitting fairly frequently, it can often be a chore to reach the critical mass you need in order to effectively construct decks. If you've got money burning a hole in your pocket, the variety pack will pretty much have you covered with a full booster box, fat pack and all of the intro pack decks for that set. That's 45 packs in addition to the pre-constructed decks. Though if you absolutely need to guarantee that you get four of each of the mythic rares there is always this 6 booster box case.

Justin says: Do you have a spare $4,100,000 laying around and are also in the market for a new place to live? Well Britannia Manor, the home of game designer Richard Garriott, is for sale. The house sits on a bluff near Austin, Texas and overlooks the city. The interior is decorated like a medieval manor, with weapons and armor adorning the walls. There are traps, hidden passages and secret rooms. Part of the main building is given over to an observatory, which is independently supported to minimize vibrations on long-exposure space photography. There is even functioning cannon to ward away pesky solicitors. If you're a gamer, geek or historian you'd be hard pressed to find a better place to hang your hat.

Paul Says: Mass Effect 2's iconic Avenger assault rifle has been brought to life by the awesome team at TriForce. Coming in at 34" in length, 12" in height and weighing a hefty 20 pounds, this 1:1 scale polystone, hand-painted replica of the M-8 is as close to the real thing you can get to outside of a trip to the Citadel. Only five hundred of these were made, so if you want to pick up your own version of one of Commander Shepard's favorite weapons, you might want to start earning some extra cash this holiday season. May I suggest shoveling snow out of your neighbor's driveway?

Susan says: Captain Jack Harkness of Doctor Who and Torchwood fame is many things: courageous, immortal, loyal, irreverent, unflappable. But above all, the man has style. Whether he's fighting aliens or macking on the nearest hottie, Captain Jack always looks fantastic, due in no small part to his gorgeous overcoat. If you've got the coin, you too can cut an impressive figure and make a dramatic statement simply by walking into the room. If you can manage the cheeky grin and over-the-top charismatic personality while you're at it, perhaps you might even be the Face of Boe someday.

Greg Says:For some gamers, luxury means an awesome PC gaming rig, or a comfy chair with a huge 3D TV and surround sound speakers. For tabletop players, the table is the most important accessory. And for the ultimate gaming experience with no limit on your budget, you absolutely need a Sultan table from Geek Chic. Each Sultan is made to order from fine hardwoods, and all the storage to fit your back issues of Dragon magazine. Geek Chic has multiple designs with impressive names like the Vizier table and the Alexandria Codex storage unit. The basic design for these units is fixed, but you can customize each piece by choosing which woods they use and the accoutrements like cup holders and dice towers. They will even install secret drawers! If you've got a spare 15 grand, get Geek Chic to make a Sultan table for you. Your gaming group will love you until the world crumbles.

Steve says: Even at a few hundred dollars, Hobby Link Japan has had trouble keeping this one in stock. Fine Molds' six-year-old Millennium Falcon model is finally back in production and you'd better get it while you can. Designed from the actual movie model used in The Empire Strikes Back and Return of the Jedi, this is the most accurate representation of the series' most iconic ship you'll find outside of ILM. With over 900 separate parts you'll basically be building this model the way that the original model was built, one incredibly tiny piece at a time. Honestly, if you're an amateur modeler looking to recreate your own version of this Corellian transport, you wouldn't have it any other way. Most of the Star Wars model kits out there require a fair bit of after-marketing fiddling to get anywhere close to authentic, but not this kit. Fine Molds even includes the first-ever engine detail, created especially for this model by the people at LucasFilm. Screw it. Even if I don't win the lottery, I'll still be getting this one.

Steve says: Seriously? A Dalek you can get in and ride around? Why has it taken society so long to finally answer this need? As a young Dr. Who fan, I remember being absolutely terrified of the Daleks; their inhumanity, their single-mindedness, their limited vocabulary. But now the folks at ThinkGeek are helping to offset the evil image of Daleks with this adorable, inflatable Dalek that little kids can actually ride in. Complete with a motor and a steering wheel, your kids can now terrorize your neighborhood by driving up and down the sidewalk, complete with playable Dalek sounds and lights. Imagine granddad's surprise when little Timmy comes out from behind the tree in this thing. "Exterminate! Exterminate! Ha! Just kidding granddad. Seriously, I hope you're around for a long time." The only bad thing I can say about this is the ridiculous weight restrictions. 65lbs? Are they expecting me to buy like four of these things and strap them together? Because I totally will.
Related to:
the escapist staffbatman arkham citybooksbuyers guidecall of duty modern warfare 3dance central 2deus ex human revolutionlegend of zelda skyward swordlittlebigplanet 2minecraftmoviespcportal 2ps3skyrimtotal war shogun 2video gameswiixbox 360
0
Tweet