And what better way to entertain the masses who had never touched a PC or console game than by bringing classic titles to the device they already owned? 2009 saw that become a reality with the re-release of landmark games Doom and even a revamped version of The Oregon Trail. These titles instantly rocketed to the top of the App Store charts, finding new life and giving untold numbers of virgin gamers a history lesson on what makes the hobby so enjoyable. 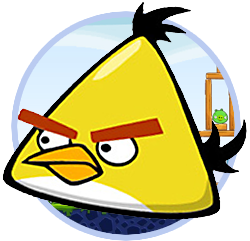 At the same time, original titles like Flight Control continued to hit the marketplace. For those of you who have somehow avoided the gravitational pull of this particular game, allow me to enlighten you: Flight Control tasks you with plotting the landing paths of various planes as they fly onto the screen. You use your finger to draw a path that will allow the plane to land without crashing into its airborne brethren. Within a year of its 2009 release it racked up 1.5 million sales at 99 cents each.

In late 2009, a cute physics puzzle game called Angry Birds quietly made a nest on the App Store. Created by little-known Finnish developer Rovio, the game began to rack up some impressive hype, and eventually hit the top spot on the marketplace. From there, the franchise took on a life of its own. Countless bonus levels, a Super Bowl commercial, and a licensed deal with the animated film Rio later, the various iterations of Angry Birds have been downloaded over half a billion times.

The franchise has become the poster child for the new gaming revolution, and you probably know at least one person whose first brush with gaming obsession has come at the hands - er, wings - of the fliers from Finland. Men, women, and children from every corner of the globe have jumped on the Angry Birds bandwagon, and it has made a huge positive influence on how others see gaming as a whole.

The iPhone - and increasingly its Android counterparts - are truly the best devices on the planet when it comes to luring in new gamers and allowing them to find what types of games they most enjoy. The titles are plentiful, and while there is plenty of white noise on the virtual store shelves, the extremely low cost of the games means that you can take chances on new genres without breaking the bank.

Retro-styled RPG titles like the Zenonia series present a massive world, but allow new players to approach the task of conquering it without the intimidation factor of a modern Final Fantasy console release. Even role-playing fans would have to agree that diving head-first into any recent triple-A RPG is probably a daunting for a newcomer to gaming. But after saving the world multiple times on your smartphone, taking that challenge via PlayStation 3 or Xbox 360 doesn't seem all that intimidating.