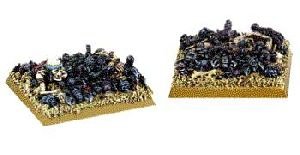 Underground Scuttlers: Instead of setting
up a Tomb Swarm on the battlefield, you
can place them to one side and say that
they are set up beneath the ground. In any
of your movement phases, you can set the
unit up on the battlefield more than 9"
from any enemy models. This is the unit's
move for that movement phase. The
unit can burrow back underground in
any of your future movement phases.
If it does, remove the unit from the
battlefield - it can return in a later turn as
described above.

If you have many fewer units in your army than an opponent, you can choose to instantly win the game if your army survives for six turns. As your army, take a a couple of tomb swarms and burrow them forever. Wait six turns... win.