Legion, the latest expansion for the twelve-year-old MMO World of Warcraft seems like a small expansion, given the areas to quest in are an archipelago near the center of the Maelstrom of Azeroth. It seems rather small given previous expansions have given us entire worlds to explore. But leave it to Blizzard to ensure that big things come in small packages, and in this case, there are tons of new content to work on. From completing storyline quests to world quests to simply searching the islands for treasure chests and other goodies, Legion has a plethora of new content for a person to level up with, or simply fulfill their completionist desires.

Here are eight mods that should help you with your OCD needs of completing everything in every zone. If you know of any others, please comment and let us know!

I would also like to add that Legion has just been released and numerous mods may still be a little buggy. It happens with every expansion, just give it time and ensure you update often! 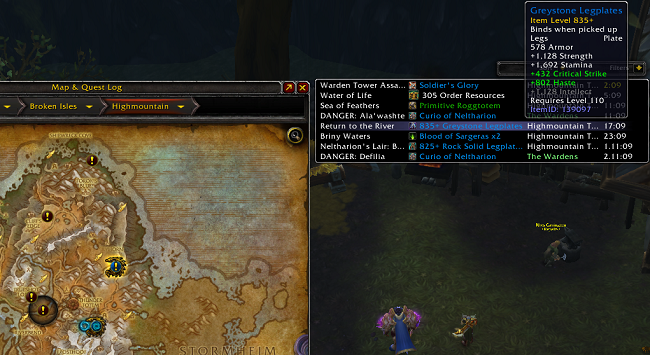 World Quest List is a useful little addon once you reach level 110 and World Quests are unlocked. Instead of scanning each zone, zooming in and out between the regions, it simply lists them all in a window next to your quest window, showing the quest name, the reward, and the faction. It helps you pick and choose which quests you want to prioritize first and move from there.

Related to:
jeff millsgallery of the daypcvideo gamesworld of warcraft
0
Tweet