Out in the Weird West

The underpinning premise of all Deadlands is that in 1863 an event called The Reckoning brought magic back into the world right in the middle of The Battle of Gettysburg during the American Civil War. Soldiers on the field came back from the dead right there, some as fully ambulatory undead with their minds intact and others as mindless monsters and zombies. Out in the Wild West, things started to get scary and weird way, way faster. Cults sprung up in California, then a disastrous earthquake wracked the landscape, and in the new faults a strange form of whitish-green coal called Ghost Rock was discovered. That discovery supercharged steam-powered devices and catalyzed a terrifying revolution in technologies, creating super-fast trains, gyrocopters, and terrifying weapons of war. Ghost Rock, by the way, shrieks like the wail of the damned in hell while it burns. Probably nothing spooky or bad about that.

All the new technology brought the American Civil War to a grinding crawl, allowing the Confederate states to survive and eventually bringing the war into a slow détente. 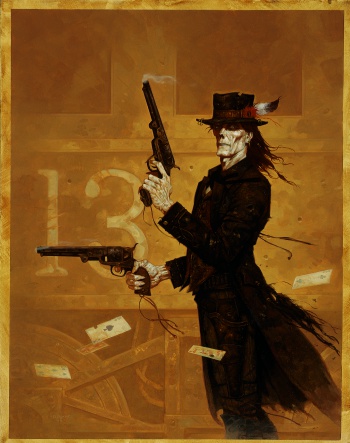 Meanwhile, all kinds of weird magic started working again or showed up for the first time. Take, for example, what are called Hucksters: Wizards that play magical poker with the devil for power to cast spells. Or the Blessed, who can invoke what are seemingly miracles for heaven. Likewise, Native American magic started invoking dangerous, real spirits, putting a hamper on the rapid expansion of America westward. Even the magic of Chinese immigrants started working, bringing the abilities of martial arts practitioners to the levels seen in modern Wuxia films.

Among this landscape a few key players exist. Rumors of a gunslinger called Stone hunting down and slaughtering lawmen across the west start to spread. A powerful technology baron called Hellstrom starts an empire of steam and rails from Salt Lake City. In California, the newly founded City of Lost Angels is run by a cult that declares themselves separate from both the Union and Confederacy. In the northern plains, a mysterious organization called The Last Sons starts to spread among the Native Americans, gathering soldiers for some apocalyptic battle against the foreign invaders.

Among all of this, the players in a Deadlands game take the role of those who would stop the spread of evil and terror through the world. Whether they're Blessed, Hucksters, Shamans, Gunslingers, or Mad Scientists, they want to find out why these bad things are happening and stop it. That's probably the angle the show will take - and in the best version it'll play out like some kind of odd mix of Supernatural and Deadwood. Deadlands embraces its pulp fiction schlock horror roots, and embraces the kind of melodrama that's very prevalent in TV these days.

We'll see what comes of it, cowpokes.